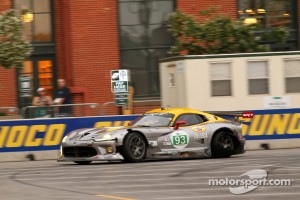 Tommy Kendall (No. 93 Pennzoil Ultra SRT Viper GTS-R) Finished 12th “That race felt like what it was supposed to feel like for both myself and the car. We’re in the conversation now and I knew from warm-up the car had pretty good pace. A huge step forward for us. At the end of the day, having an incident while you’re racing with a Ferrari for position, that’s great stuff. Marc (Goossens) didn’t mean to do it. He got it locked up there and then he just couldn’t stop. It’s exciting that we are able to race competitively on this type of circuit. So much work has gone into this. Obviously I feel bad for Dominik (Farnbacher) but he’ll come back strong. Today, this is another milestone. The first milestone was finishing both cars at Mid-Ohio and having a car actually mix it up with some of the other cars that have won races is awesome.”

Bill Riley (Vice President – Riley Technologies) “The car went really well today. We had a good gap to close up to the lead pack which we’ve all been working on. We’re closing that gap every race. I’m pleased we made another good step forward. We just have to keep working on it.”

THERE IS A GOOD BIT OF WORK TO DO ON THE NO. 91 SRT VIPER GTS-R. “We have a test at Road Atlanta in two and a half weeks so we should get the car fixed for that but it’s going to be some long hours at the shop.”

YOU MUST FEEL GOOD ABOUT THE PROGRESS AFTER THREE WEEKS. THIS IS NOT AN EASY TASK. “I don’t think we’re going to feel good until we’re at the top.”

Matt Bejnarowicz (Lead Engineer – SRT Motorsports Team Viper) “We had a pretty tough weekend I’d say. We had a lot of, I guess, drama to the team but I think we ended on a pretty high note. We made progress the whole weekend and I think the race showed that we are closing the gap on the leaders. It’ll be good to have a little bit of a break here because we’ve run back-to-back races every two weeks. The team has really pushed hard to get us back in the right shape. You know we have a little bit of breathing room to assess where we’re at and apply what we’ve learned to make the car go a little bit closer to the lead lap cars.

IT APPEARS THERE’S NO ISSUE WITH TEAM CHEMISTRY; THERE ARE TWO CARS BUT ONE TEAM. “That’s probably the most exciting thing. Regardless of what we’re doing right now on the track, where the cars are competitive, I really don’t have any concern that we’re not going to get there. I think that’s because of the comfort that I have in all the crew. We put the team together from scratch and we hand-picked both abilities and personalities. Now, we’re all seeing that grow and the team is kind of becoming greater than the sum of its parts. It’s a real pleasure to see that. When everything kind of clicks together, we’re going to really accelerate fast.”

Kuno Wittmer (No. 91 Forza Motorsports SRT Viper GTS-R) “I think that after what happened this weekend, with the results and the ups and downs and showing how competitive we are in the race, you know this will be applied to both cars. We learned a lot this weekend with the results. I’m strongly looking forward to Petit Le Mans. Dominik and I are very focused and ready for it. Physically we’re ready; we’re in the best shape of our lives and let’s just make the best of it. It’s going to be a long race and I guess just as a personal point, it’s something I’ve been looking forward to since the age of 16 to run at Petit. I think we’re going to do well.”

Dominik Farnbacher (No. 91 Forza Motorsports SRT Viper GTS-R) “Of course we’re looking forward to Petit Le Mans. Friday (the accident) was a dark day of our racing program. Looking at the other car, the 93 ran very strong, the strongest ever. We’re in a range of one second with the competitors. That was basically our goal this weekend and we did it. That’s very, very promising for the next race. We have another test coming up, so we have a few other things we’re going to try out but Petit should be good ground for our Viper. I think we can set the goal higher than ever.”

MacNeil and Keen finish second in WeatherTech Porsche at Baltimore