AUBURN HILLS, Mich. (Tuesday, Jan. 22, 2013) – SRT Motorsports recently completed its first on-track test of the 2013 season with the SRT Viper GTS-R. The results at Sebring (Fla.) Raceway left everyone involved with a smile on their face. 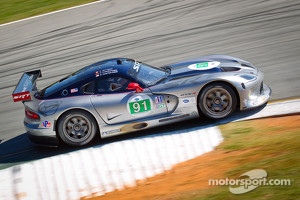 SRT Motorsports and Riley Technologies, based in Mooresville, N.C., partnered on the design-and-build of the SRT Viper GTS-R race cars to compete in the American Le Mans Series presented by Tequila Patrón. Two SRT Viper GTS-Rs made their debut at Mid-Ohio last August and used four 2012 races as a test-and-tune for a full 2013 schedule in the GT class beginning with the season-opening 61st Mobil 1 Twelve Hours of Sebring on March 16.

Despite dealing with an abrasive and bumpy racing surface at Sebring, the team made improvements in many areas including overall speed and durability. Gary Johnson, Road Racing Manager for SRT Motorsports, said the group had a really good test session for a number of reasons.

“We had a really good test,” Johnson said. “We covered a lot of miles and had a lot of different configurations with the cars. We tuned some new components and we made improvements in almost every area. The really great thing about those cars is that they are rock solid, reliable and durable as well.

“Sebring is a unique track. It is quite bumpy and has many different surfaces to it, so it’s really important to do testing there and tune the car specifically to that track. It’s good that we went there this month. We’ll be there again in early February, so I think we we’re going to have a very good handle on how the car should be set up for race day.”

“I feel that the test is, hopefully, a really good indication of how the year is going to go,” said Riley. “We had the cars completely stripped apart in the winter. The guys put ‘em back together and we didn’t have any major issues at all during the test. We’ve also been working on some development parts; those all worked. If you can get the car to go around Sebring, go over the bumps and not fall apart, then you pretty much know you’re going to have a pretty good season. That’s just the way Sebring is; that’s why Audi comes over and runs it every year.”

Matt Bejnarowicz, Viper Lead Engineer for SRT Motorsports, pointed to the reliability of the SRT Viper GTS-R cars for the successful test.

“The test was completely successful,” said Bejnarowicz. “We went a fair amount faster from the time we unloaded to the time we left, but that’s only part of the accomplishment. The team made a lot of changes to the cars in the off season – the GTS-Rs were down to bare frames and rebuilt. Once again, the cars unloaded, the drivers hit the start button and they ran all day. We’re really, I think, blessed; sometimes we forget how fortunate we are that we’re not fighting engine issues and we’re not fighting mechanical or electrical problems. We unload and focus on our test plan, not mechanical issues. It’s a testament to the guys that are on the engine program, the crew of mechanics, and the engineers. There’s never a preparation mistake on the cars. It’s an underlying success that’s easy to forget about, but we have all been on teams or seen others struggle with teething pains and issues that ruin a day. We’re really fortunate because we don’t fight any of that, which allows us to get down to business right away.

“From a performance standpoint at the test, we made the car quite a bit better. We have a handle on what Sebring requires from a tuning standpoint and loaded up with a lot of information to take back and prepare for the ALMS winter test.”

Lotterer will miss Sebring due to testing R18 in Japan