SRT Viper heads to the Streets of Baltimore

THE VIPER GTS-R IS BACK IN 2012
- In the two races entered this season – Mid-Ohio and Road America – the No. 91 Forza Motorsports SRT Viper GTS-R posted top-10 finishes. 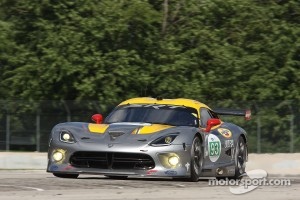 DRIVER QUOTES: “In the two races, we’ve seen huge improvements in team development, teamwork and of course the car. We found out a lot about the car, what direction we have to go to make the car work. We also found out that the car we have is incredibly reliable. We have improved many points and we feel we are getting closer and closer to our rivals every race. Again, reliability is our strength. We want to finish the race and get more mileage on all components and engine. A great finish in the top 10 is the goal.”
--Dominik Farnbacher – No. 91 SRT Viper GTS-R


“When it comes to a street course, it’s difficult to adapt so quickly. The time that you need to learn the course is very limited. We don’t have a Thursday test day so we have to learn everything in two hours on Friday before qualifying. That involves the drivers learning the track and the engineers learning what the car does in practice and makes changes to get it ready for qualifying and the race. The race is two hours. It’s short but two hours on a street course is pretty physically demanding.” --Kuno Wittmer – No. 91 SRT Viper GTS-R

“We’re constantly working to understand what the car likes, what it doesn’t like and the effect of each change the team makes. We’ll take what we’ve learned in the first two races and see how it applies to the street course at Baltimore.” --Marc Goossens – No. 93 SRT Viper GTS-R

QUOTE OF THE WEEK
“It’s always special to race on holiday weekends. To do it at a place that is as historic as Baltimore and driving an American icon like the Viper is great. It’s where the poem (by Francis Scott Keys) became the greatest song in the world, where the Star- Spangled Banner was written. It’ll be a pleasure to be commanding some big American horsepower around there.” --Tommy Kendall, No. 93 Pennzoil Ultra SRT Viper GTS-R

SRT MOTORSPORTS
“The team is really starting to work together well. Everyone seems to be getting into a routine now, knowing exactly what they need to do, and learning to work together effortlessly. It's great to see all of the individual members growing into a single-focused team.” --Gary Johnson, Road Racing Manager

FROM THE ENGINEER
“We jumped into the season at the most intense time and it has definitely been a challenge. We had some unfortunate damage at both Mid-Ohio and Road America that takes priority and also eats up time to make improvements. After both of the last two races, the team had approximately six days in the race shop. This basically left enough time to tear down and inspect the cars, perform routine maintenance, repair and repaint the cars, and prepare them for the next event. The race team is very talented, so even with the high work load, we have been able to implement improvements where needed. With that said, I know we are looking forward to the break between Baltimore and Petit (Road Atlanta), as we have many tests and development activities planned during the following six weeks. Our pace won't slow down at all, but our focus will change to development for a short period.” -- Matt Bejnarowicz, Lead Engineer -- SRT Motorsports Team Viper

FROM RILEY TECHNOLOGIES
“We had a quick turnaround between Road America and Baltimore. We had some damage to repair but we have the cars all fixed and they look good. The challenge is we’re going to a street circuit that we’ve never been to before. We have to make sure that we get the gearing and setup right. Street circuits are generally really, really bumpy. We haven’t faced that type of situation yet, so we’re hopefully we’ll figure out what our cars want.

”We’re making pretty big gains on our pit stops and driver changes. We’re going to do quite a bit of practicing this weekend to make sure we get it better and better, smoother and smoother.” -- Bill Riley, VP and Chief Engineer