One of the former American Le Mans Series GT manufacturer champions announced today at the New York Auto Show that they will return to competition in the hotly-contested LM GTE class during the 2012 season. SRT Motorsports partnered with Riley Technologies will head the project of the Dodge Viper SRT Viper GTS-R for the Chrysler Group.

“Racing has been a significant part of the illustrious history of Viper not only with significant wins on the track, but also in the continued development of the street cars – and our new 2013 SRT Viper models are proof of those lessons learned,” said Ralph Gilles, President and CEO – Street and Racing Technology Brand and Motorsports, Chrysler Group LLC.

Racing has been a significant part of the illustrious history of Viper...

With their past ALMS championship under their belt, the Viper will again contest for victories this year when they return to the American-based series, and in 2013 they will aim for the coveted LM GTE team, manufacturer and drivers titles. In 2000, Hugues de Chaunac’s Viper Team ORECA earned the GT championship. Their former driver, Olivier Beretta won his first ALMS GT title in 1999; he repeated the feat in 2000. Adding to the Viper’s resume is three GTS class wins at the 24 Hours of Le Mans (1998, ’99, and 2000).

While the Viper brand has been seen on-track action in both the Sports Car Club of America Pro World Challenge Series, and in the Grand-Am Road Racing series, this new venture with the Viper GTS-R will be an in-house factory team. “I don’t think it’s possible to overstate the significance of the SRT Viper returning to the top level of professional sports car racing,” said Scott Atherton, President and CEO of the American Le Mans Series.

The V10-powered Viper will challenge the current manufacturer LM GTE teams, including the defending BMW RLL champions; along with the Porsche, Ferrari, Lotus, and Corvette teams.

Atherton commented, “The Chrysler Group has a long, storied and very successful history of competing with the American Le Mans Series. We would be hard-pressed to come up with a better scenario than having the brand return with the simultaneous introduction of both the new production car and the competition version. What a great way for SRT Viper to come back to racing.” 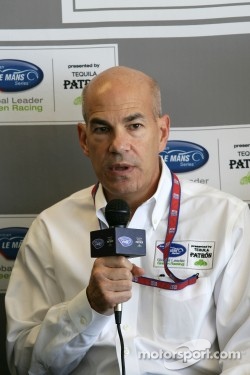 The three drivers who will have the honor of taking on the challenge include two who have competed several times in the ALMS. Dominik Farnbacher grew up in a racing family, and the German’s sportscar career includes 24-hour races at Nurburgring, Daytona, and the premier event in Le Mans. Marc Goossens has 11 24 Hours of Le Mans events in both the GT and the prototype classes. The Belgian’s best finish on the La Sarthe circuit was in fourth overall and second in the LM P class in 1997. Kuno Wittmer will make his debut in the ALMS but the Dodge factory driver is more than up to the challenge as he brings a wealth of experience, including his years in the SCCA World Challenge Series. Last year, the Canadian had the chance to take on the ADAC GT Masters in Assen, Netherlands, in one of the SRT Vipers.

“Now with our new team and the launch of the GTS-R, we’re excited and proud to begin writing more chapters in the racing history of the Viper later this summer,” Gilles said.

The debut race for the new SRT Viper will be announced at a later date.