Marc Goossens (No. 93 Ultra SRT Viper GTS-R) Qualified Sixth “It’s was a very good qualifying run. The whole group has been pushing this program forward. We were looking for a good start for the race but didn’t know how much everybody was holding back in practice. Most of the time, we were anywhere between .5 and .8 out of P1. I thought they might have had a little extra for qualifying but obviously not. We pushed it as hard as we could. I guess those guys did too. We’re like .46 off P1. It shows we’re making a lot of progress through the races. We’ve had our bad-luck streak with the accidents and everything else. This group is working so hard, I think we got rewarded here today, qualifying in the top six and being so close to the front. We qualified better than some people that are championship contenders. All the credit goes to the team. There’s been a lot of hard work this weekend. So far, we’re very pleased but we shouldn’t forget tomorrow is a very long race. We have to prove the reliability now.” 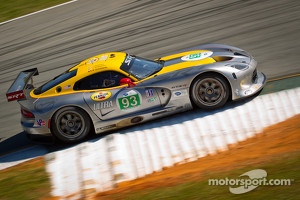 Dominik Farnbacher (No. 91 Breast Cancer Deadline 2020® SRT Viper GTS-R) Qualified 10th “From Mid-Ohio to here, our program continues to get better and better. Look at Marc’s time. He did an awesome job. We’re right there with the front runners. We can be very happy with our performance and the gains in our development program. Now, we focus on tomorrow’s 10-hour race and the reliability of the car. Next year, we want to be ready to attack for the full season.

“My run in qualifying was good. Last night, we could not do the mandatory three laps for the drivers (the No. 91 was involved in a mishap during the two-hour practice session) so we have to start from the back of the grid tomorrow. So, today was a good opportunity to use the qualifying session as a test run. We put on used tires and used the time more or less as a race situation. We were very happy with the car and results. There are still some things we will modify on the car to make it even better for the race tomorrow.

“The team did an incredible job repairing the car. They worked until 3 o’clock (this morning) and the car was like new again. Thanks to my team. They’re awesome.”

Kuno Wittmer (No. 91 Breast Cancer Deadline 2020® SRT Viper GTS-R) “All three drivers are eligible to drive for the whole 10 hours, anytime we want. The only downside is we have to start from the back. Ten hours, so much stuff can happen; we won’t really be hurt being in the back. We’re ready to go tomorrow.”

Bill Riley (Vice President – Riley Technologies) “I’m very proud of this group. It’s a two-way deal. I’m proud of the way the guys worked to get the No. 91 back together. They worked on it until past 3 (a.m.) this morning. Although it looked like a small hit, it kind of went through the car pretty deep. Everybody worked hard on that. Obviously, Marc and the No. 93 guys qualifying under a half second off P1 is huge. That’s a little bit beyond perfect.”

FROM MID-OHIO TO ROAD ATLANTA, WHAT HAS CONTRIBUTED TO THE PROGRESS? “It’s just the hard work by everybody from Ralph (Gilles, President and CEO – Street and Racing Technology Brand (SRT) and Motorsports) on down to everyone here. Everyone has been working hard. We’re going in the right direction. So, here we are.”