Marc Goossens (No. 93 Pennzoil Ultra SRT Viper GTS-R) "It’s a learning process. We had a pretty good start of the race. I was hanging in there; it wasn’t too difficult to keep up the speed. We’re not sure what started our problem. It’s definitely not the way we wanted to end our day. 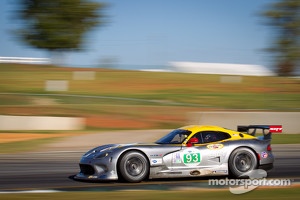 "We’re definitely doing better. We’ve made a lot of progress. We’re more competitive. The speed is getting there. But what shows today is we’re not there yet with regards to reliability. I think it’s easier to make a fast car reliable than to make a reliable car fast. We’ve proven that the baseline is there. We showed it in qualifying. Our lap times in the race are getting much closer to the leader. Overall, if you look at where we were at Mid-Ohio, then Road America, then Baltimore and now here, I think it’s all going in the right direction. It’s time to go back and think about all the things that we did and prepare the winter testing the way we should in order to be more competitive and reliable by the time Sebring comes around next year.”

Tommy Kendall (No. 93 Pennzoil Ultra SRT Viper GTS-R) "They say you learn as much or more from your failures as you do from your successes. At least that’s what I’m telling myself right now. The day started out with a lot of promise. As good as our qualifying was, our real goal was just to stay out of trouble and finish. That didn’t happen. We learned a fair amount. We’ll go back and figure out what went wrong and correct it. The No. 91 is having a good run, a relatively trouble-free run. We’ll go into the off season, take a quick breather, rest up a little bit and get back at it to get ready for Sebring.

"We’re showing competitive speed. That’s encouraging. Next year, it all counts. We do not have any throwaway races. We need to show up at Sebring and have the kind of race we were hoping to have here.

Jonathan Bomarito (No. 93 Pennzoil Ultra SRT Viper GTS-R) "I think overall, everybody on our team is disappointed but from my perspective, it was good for me to get involved with the team as the third driver. It was our first long endurance race, a 10-hour race. It was good for me to be with the team, start jelling with the engineers, the crew members and drivers. From that perspective, it was a big success for my part. We would have liked to have had a better day. But we’re learning. It’s the team’s fourth race and this was a good one to learn what we need to do to prepare for next year. They’re going after the championship next year, run the whole season. We needed an endurance race like this under our belt.”

Dominik Farnbacher (No. 91 Breast Cancer Deadline 2020® SRT Viper) "We had highs and lows today, but we learned from all of them and will make our cars better the next time. The car had to last 10 hours. It’s the fourth race for the car and we came out and raced to the end. We’re very proud of what we’ve accomplished. I’m very proud of my team. We’ll all working very hard. We wanted to make it to the finish; that’s all we wanted.”

NOTE: THE ISSUE WITH THE NO. 93 PENNZOIL ULTRA WAS A PROBLEM WITH THE SHIFTING SYSTEM.

Kuno Wittmer (No. 91 Breast Cancer Deadline 2020® SRT Viper GTS-R) "If you look back at the year the way everything progressed, from January when the project was on the drawing board to Mid-Ohio when we made our debut and we had our first top 10, then Road America another top 10 and now another top 10 with our best finish of eighth, I’m ecstatic for the team, the drivers, our sponsors. The team has been extraordinary all week. We put our heads down and accomplished something really good today.

"I envisioned that we could go the full distance today because of who is working on the team. They want to make this work. What surprises me is how competitive we are so quickly. It feels really good.

"We have a lot of testing planned, a lot of things we want to try, a lot of new ideas. It’s going to be really interesting getting ready for next year.”

Ryan Hunter-Reay (No. 91 Breast Cancer Deadline 2020® SRT Viper) "I had a lot of fun. The team has come a long way such a short amount of time in probably what is the toughest GT category in the world. It’s an entire team effort. Every session, there’s been progress. I think SRT and the Viper Nation has a lot to look forward too because this team is coming strong. I’m just happy to be a part of it. There’s plenty of room for progress. This is going to be a much-needed off season for the team to work on the car. I think they’ve done an excellent job. It’s such a competitive category and we’re right there running the same lap times as the leaders.”

Bill Riley (Vice President – Riley Technologies) "I’m very pleased. I think the thing we did today is we had a good qualifying effort, a fast race pace, the No. 93 running third for a while until they had some issues, the No. 91 leading the race for a little bit in the middle and had a fast pace all day. I think we have all the pieces of the puzzle; we just have to make sure we put them together when we go to Sebring next year.

"We’re going to take a little time off from testing, get all of our ducks in a row, make sure everything is pointed in the right direction and then we’ll start hitting it hard (testing) right after the first of the year.”

Gary Johnson (SRT Motorsports Road Racing Manager) "I’m very pleased with the progress of the program. The SRT Motorsports team has done a great job with improving the car every time it went out. I think we have shown the car has a lot of potential. I’m really looking forward to making some improvements over the down season and coming back really strong for the 2013 season.”