History has been made and now, the SRT Viper team seeks embellishment in the form of a second-straight victory in Saturday’s Grand Prix of Baltimore presented by SRT.

Farnbacher and Goossens return this week in the No. 91 SRT Viper GTS-R, and will be joined by Jonathan Bomarito and Kuno Wittmer in the No. 93 Pennzoil Ultra Viper GTS-R.

“We proved last year that if you want to have a good result at Baltimore, you have to stay out of trouble,” Goossens said, referring to last year’s race where they ran a solid eighth before a late-race incident. “It’s a place where you need to be very patient, and we showed at Long Beach (where they finished third) that we can do that and are up for a good result on a street course. Last year at Baltimore was one of our better runs with the SRT Viper GTS-Rs. But it’s a completely different game this year, and I’m looking forward to going back there stronger than we were last year.” 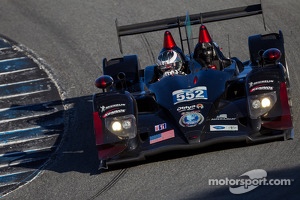 Scott Tucker’s Level 5 Motorsports has made changes to its driver lineup as it looks to continue its success on the streets of Baltimore. A year ago, the team scored a 1-2 overall finish in addition to winning the P2 class, with Tucker joining Christophe Bouchut in the winning No. 055 HPD ARX-03b in addition to finishing second with Luis Diaz and Ricardo Gonzalez in the No. 95.

For 2013, Tucker is set to drive in one car at Baltimore, with the P2 points leader joining Marino Franchitti in the No. 551 Siemens/Alpina Watches/Ohiya Casino Resort HPD ARX-03b. New Level 5 addition Guy Cosmo will share the No. 552 entry with Ryan Briscoe, who has tested with the team and has been cleared to compete after missing two races while recovering from a wrist injury suffered in an IZOD IndyCar Series race.

“Sweeping the top two steps on the podium at Baltimore last year was definitely one of the year’s highlights,” said Tucker, who leads Franchitti by four points in the P2 standings (109-105). “It is a very challenging circuit and the whole team performed exceptionally well. We are looking forward to going back. We have a lot of great memories.”

Cosmo’s place with Extreme Speed Motorsport will be filled by Anthony Lazzaro, who joins Scott Sharp in the No. 01 Tequila Patrón HPD ARX-03b. Ed Brown and Johannes van Overbeek share the team’s No. 02 entry. 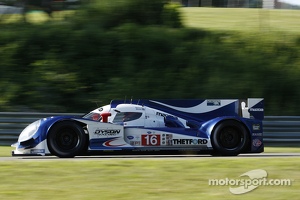 Regular drivers Chris Dyson and Guy Smith return to the wheel of the No. 16 Mazda/Thetford/Norcold Lola B12/60, looking to give Dyson Racing its third consecutive P1 victory at Baltimore.

Humaid Al Masaood and Steven Kane took overall honors in the team’s No. 20 entry in the 2011 inaugural Baltimore event, with Dyson and Smith placing second – seven seconds back – after Dyson led the first half of the race. Smith won the pole as Dyson qualified 1-2.

Michael Marsal and Eric Lux won the class in the No. 20 a year ago. Chris Dyson celebrated his 100th ALMS start in last year’s Baltimore event, finishing second with Smith.

“The circuit is challenging and really showcases the cars and precision driving,” he said. “There is zero margin for error, and that’s what makes a good lap and race results there so rewarding.”

Tony Burgess and Chris McCurry stepped in to co-drive the No. 16 at Canadian Tire Motorsport Park and Road America, finishing second in both events to move up to third in points.

Smith, the winner of the 2003 24 Hours of Le Mans, is in his ninth year with Dyson Racing.

Falken tire’s Sellers, Henzler undefeated on the Streets of Baltimore

Based on past history, Team Falken Tire is the pre-race favorite to capture GT honors Saturday. Bryan Sellers and Wolf Henzler are unbeaten on the Inner Harbor Street Circuit, winning in 2011 and 2012 in the No. 17 Falken Tire Porsche 911 GT3 RSR. 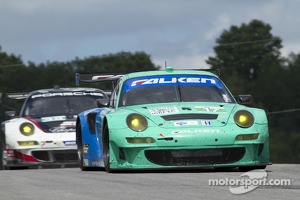 “We have a major target on our backs leading into the event, but we will work as hard as we possibly can to get a good result,” Sellers said. “Baltimore has been great to us. The city has really embraced the event and made us feel very welcome.”

Sellers scored two of his three career ALMS victories at Baltimore. Henzler is an eight-time winner, and shared the 2008 GT2 championship with Jorg Bergmeister with Flying Lizard Motorsports.

“Last year, our competitors were a little bit faster, but we were fast enough in the right parts of the track that we didn’t give them a chance to pass us. This is a strong track for Porsche and Falken Tire. They’ve put a lot of development into the street tire, and it has proven itself in Long Beach and Baltimore.”

With four races remaining in the 2013 American Le Mans Series presented by Tequila Patrón season, the competition in the Michelin GREEN X® Challenge is matching the intensity of the competition on the track.

The Michelin GREEN X® Challenge “race within the race” rewards prototype and GT entries that have the best clean, fast and efficient performance under a formula established by the U.S. Department of Energy, the Environmental Protection Agency and SAE International.

The No. 3 Corvette Racing team overcame a four-point deficit to the No. 56 BMW over the past two races to take the lead in the GT competition. With a scoring system similar to golf, in which lower is better, the No. 3 team now leads by nine points over the No. 56 BMW (124-133).

In the prototype ranks, Muscle Milk Pickett Racing has scored 96 points, with the two Level 5 Motorsports teams tied for second with 145 points each.

Chevrolet leads in the Michelin GREEN X® Challenge GT Manufacturers standings with 100 points, while BMW and Ferrari are tied for second with 126 points, and SRT another 15 points back.

Racer/actor Patrick Dempsey’s quest to compete in this year’s running of the world’s greatest sports car race is the focus of Patrick Dempsey: Racing Le Mans, a four-part miniseries that will debut on the Velocity network, beginning on Wednesday, Aug. 28, at 10 p.m. ET.

Joined by fellow ALMS drivers Joe Foster and Patrick Long, Dempsey finished fourth in the GTE class at the June classic, missing a podium finish by a mere 90 seconds. The premiere episode tells how the star of Gray’s Anatomy strikes a balance between his acting career and racing – following in the footsteps of legendary actor/racers Paul Newman, Steve McQueen and James Garner.

Baltimore residents unfamiliar with racing will have no problem finding a car to cheer for in Saturday’s Baltimore Grand Prix. The No. 67 Team Baltimore Porsche 911 GT3 Cup will be painted in the black- and- orange colors of the Baltimore Orioles, driven by a local driver to benefit local charities.

“I’m proud of my city – it’s a great venue for a great show,” Bunting said. “It’s awesome to be able to race around the city streets legally.”

“Having the race car is a unique opportunity for the Big Brothers and Big Sister mentors and mentees to bond,” Bunting said.

Bunting has been competing with Team Baltimore in the event since its 2011 debut. He finished fourth in GTC with Spencer Pumpelly last year, and fifth with Dion von Moltke in 2011.

Although not a regular in the ALMS ranks, Al Carter will return to the series to defend his GTC victory in Saturday’s Grand Prix of Baltimore. The race gives the GRAND-AM regular the opportunity to race near his hometown of Greenville, Del., driving the No. 68 Horizon Services Porsche 911 GT3 Cup for TRG with Frenchman Kevin Estre.

Carter won the class in 2012, leading the race before turning the car over to Patrick Pilet. He finished second in his only other ALMS race at Mid-Ohio in 2012, also leading the race while co-driving with Spencer Pumpelly for TRG.

This weekend also gives Pumpelly the opportunity to return home. The Atlanta resident was born in the Washington, D.C. suburb of Mason Neck, Va., and lived in Baltimore for one year after getting out of college.

“I’m looking forward to the weekend, because I still have lots of family in the area,” said Pumpelly, who co-drives the No, 45 Venezuela/eSilicon Porsche for Flying Lizard Motorsports with Nelson Canache Jr. The pair is coming off their second victory of the season and hold a four-point lead in the GTC standings.

All four SRT Viper drivers will take a pit stop prior to the Grand Prix of Baltimore presented by SRT with a visit to children who are patients in a major hospital located one mile from the Inner Harbor Street Circuit.

Dominik Farnbacher and Marc Goossens will be joined by teammates Tommy Kendall, Kuno Wittmer and Jonathan Bomarito on Thursday morning at the Johns Hopkins Children’s Center in downtown Baltimore.

Approximately 10-15 children are expected to participate in the live closed-circuit television show, while another 30-40 are anticipated to watch from their rooms. The visit was facilitated by the Austin Hatcher Foundation for Pediatric Cancer in cooperation with SRT and the ALMS.

· DeltaWing Racing Cars announced a coupe version of the radically innovative DeltaWing is available now for advance customer purchase to teams planning to compete with United SportsCar Racing in 2014. The car will debut at Circuit of The Americas on Sept. 21. … Bruno Junqueira is looking for a third triumph in the last four races in the No. 9 RSR Racing ORECA FLM09. Alex Popow will co-drive with Junqueira this weekend before finishing out the season with the Starworks Popow team.