The Viper GTS-R is back at Road Atlanta in 2012 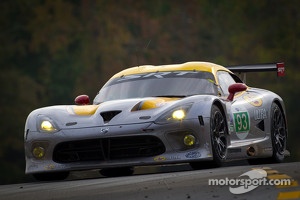 • The driver lineup for Petit Le Mans: Tommy Kendall and Marc Goossens will be joined by Jonathan Bomarito in the No. 93 Pennzoil Ultra Viper GTS-R. Dominik Farnbacher and Kuno Wittmer will share driving duties with Ryan Hunter-Reay in the No. 91 Hewlett Packard Viper GTS-R.

• This is the first on-track, factory-based participation for the SRT Viper GTS-R in the ALMS since 2000, competing in the production-based GT class.

“We have made huge improvements; I think more than we expected. We’ve closed the gap to our opponents from the first race to the last race. We are more competitive. The car is just fantastic. I see the potential to follow the ‘tire marks’ of its older brother – the original GTS-R.” --Dominik Farnbacher – No. 91 SRT Viper GTS-R

“Road Atlanta is a true test for next year’s first race. It will give us good data as we prepare to run the full 2013 schedule. With the progress we’ve made, we’re now entering a phase where we can actually compete for positions. Our Vipers have shown great reliability in the first three races. The team is working together; there’s great harmony.” --Kuno Wittmer – No. 91 SRT Viper GTS-R

“What a great opportunity this will be as my first race with SRT and the all new Viper GTS-R. I’m really looking forward to further developing the car this weekend in preparation for what will be the new Viper’s first endurance race. I love the challenge of being involved in the development of a race car and that’s what we’re constantly doing here. I have a great relationship with the folks at SRT and Riley Technologies, so I feel right at home.” --Ryan Hunter-Reay – N. 91 SRT Viper GTS-R

“Baltimore was a real boost for us in terms of being able to mix it up with some of the other cars that Viper wants to compete with – they were in our ballpark. That was a big boost for everyone and a validation of the progress that we’ve made. The front runners are still setting a pretty high mark. The goal for Road Atlanta is to see if we have closed the gap a little bit further.” --Tommy Kendall – No. 93 SRT Viper GTS-R

“Road Atlanta is very challenging with the combination of fast and slow cars and strong elevation changes. There are not so many overtaking possibilities; the track is rather narrow and twisty. The difference in speed between the prototypes and GT cars is going to be very challenging for both classes. This is also the first big test in reliability.” --Marc Goossens – No. 93 SRT Viper GTS-R

“The races that SRT Motorsports has chosen to run in 2012 will help tremendously for the 2013 season. Each track is very different and gives the team a chance to evaluate the car in several different configurations.” --Jonathan Bomarito – No. 93 SRT Viper GTS-R

QUOTE OF THE WEEK
“We’re happy with the state of our program. Everything has been a positive in 2012. There’s nothing that we would have done differently or been able to do differently to put us on a better path than what we are currently facing. We knew how challenging this series is and how difficult it would be to run at the front before we started any plans to race. Knowing what we have accomplished in the last nine months and the plans we have underway, we have confidence in the future success of the SRT Viper GTS-R on the track.” Matt Bejnarowicz, Lead Viper Engineer – SRT Motorsports

FROM THE TEAM LEADERS
“Every time we go out, we’ve made improvements. Road Atlanta is another data point for us to get better. The real trick will be finishing the race. We’ve received assistance from the ALMS balance of performance program and that seems to help quite a bit on some straight-line speed.” --Gary Johnson, SRT Motorsports Road Racing Manager

“I think we’re making pretty big gains and feel like we’re starting to get closer to the front and see where we stack up. Every time we go to the track, we learn more about the car – what it wants and, more importantly, what it doesn’t want. We continue to make those subtle changes which get us closer and closer to where we need to be. We’ve had good reliability with our cars.” -- Bill Riley, VP and Chief Engineer, Riley Technologies