In addition to a full-time ALMS schedule in 2013 in the GT Class, SRT Motorsports has also accepted an invitation for both cars to compete in the 24 Hours of Le Mans in June. The driver lineup for Sebring: Tommy Kendall, Kuno Wittmer and Jonathan Bomarito in the No. 93 SRT Viper GTS-R; Marc Goossens, Dominik Farnbacher and Ryan Dalziel in the No. 91 SRT Viper GTS-R. 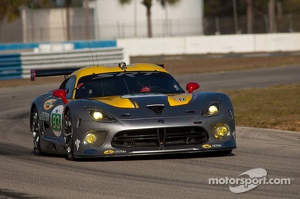 Quote of the week

“The rehearsal is over and it’s time to go racing for real following a tremendous effort over the past year to move this program from the drawing board to the competitive status we’re working toward this weekend. Sebring presents a stern test for our SRT Motorsports team and our two SRT Viper GTS-Rs, a challenge we eagerly accept. With our partner Riley Technologies and our talented driver roster, we’re confident that we’ll be competitive in the GT Class in the American Le Mans Series this season. We’ll learn a lot about our prospects for the season this weekend as the 12 Hours of Sebring is as tough a test as we’ll encounter all year.” -- Ralph Gilles, President and CEO, SRT (Street and Racing Technology) Brand and Motorsports

From the team leaders

“Both of our SRT Viper GTS-Rs ran well at the Winter Test at Sebring with no major issues. While we were competitive with the other manufacturers that were at the test, a 12-hour race at Sebring is a tremendous challenge. The track is demanding for both driver and equipment. Considering that last year was a partial season for the brand new race cars, they showed remarkable durability and reliability. The SRT Motorsports team has worked hard over the winter to improve on that and we’re anxious to start the season. As always, Saturday’s race is going to be very interesting.” -- Gary Johnson, SRT Motorsports Racing Manager

“Every time we go to the track, we learn more about the car – what it wants and, more importantly, what it doesn’t want. We’ve continued to make those subtle changes which get us closer and closer to where we need to be. We have good reliability with our cars. We’ll see where we stack up this weekend.” -- Bill Riley, VP and Chief Engineer, Riley Technologies

“We have made huge improvements; I think more than we expected. We’ve closed the gap to our opponents from the first race to the last race. We are more competitive. The car is just fantastic. I see the potential to follow the ‘tire marks’ of its older brother – the original GTS-R.” -- Dominik Farnbacher – No. 91 SRT Viper GTS-R

“As in any other race, you need to have the minimum of bad luck. Sebring is a tough one on the equipment. It’s a very bumpy track and there is no room for error; there’s not much run-off area. It’s very demanding for both driver and car. The track is rough, so for the mechanical side of the car it’s a good test for durability.” -- Marc Goossens – No. 91 SRT Viper GTS-R

“I’m extremely excited and grateful to be part of the SRT Motorsports program this year. I think the most important thing at Sebring is traffic and keeping the car clean. I have no doubt that the SRT Viper GTS-R has the reliability to get us to the finish line. We have to be smart not only on the track but also in the narrow and always busy pit lane to avoid contact and damage to the car.” -- Ryan Dalziel – No. 91 SRT Viper GTS-R

“Going into the 12 Hours of Sebring, we’re very thankful we completed a 10-hour race last year – Petit Le Mans – with zero issues. That’s a positive thing. This is my first start in the 12-hour and I’m strongly looking forward to it. It’s a very, very tough race with all the bumps. I do a lot of endurance training, a lot of cardiovascular training and I’ve really upped that to a new scale this year.” -- Kuno Wittmer – No. 93 SRT Viper GTS-R

“You know, I haven’t raced at Sebring since ’99 but it’s amazing how quickly the stuff comes back to you. I like the track. It’s hard on everyone and everything. There’s a cool rhythm here and a good assortment of corners. The thing that frustrates you the most about trying to get the car to work over the bumps is that’s also where the gains are.” -- Tommy Kendall – No. 93 SRT Viper GTS-R

“It’s March and probably going to be around 80 degrees; that weighs on the driver. And the track is high load – a lot of grip and very bumpy. It definitely takes a toll on everybody – the crew, the car and the drivers. It’s a tough place.” -- Jonathan Bomarito – No. 93 SRT Viper GTS-R