Former Trans-Am series dominator and arguably one of the more popular American sportscar drivers of the last decade, Tommy Kendall will be making his return to American Le Mans Series competition as part of the new SRT Viper GTS-R team that will debut at Mid-Ohio August 4.

Kendall made the announcement Sunday night on SPEED’s Wind Tunnel with Dave Despain. “I got a call out of the blue about six weeks ago inviting me to a driver shootout,” he said. “I said what the heck, let’s do it although I haven’t driven anything competitively in six years. I didn’t have any idea how it was going to turn out, but fortunately the stopwatch doesn’t know how old you are. Obviously, it went well enough and I got the nod. I’m going to be campaigning for SRT Motorsports and their Viper program in ALMS.” 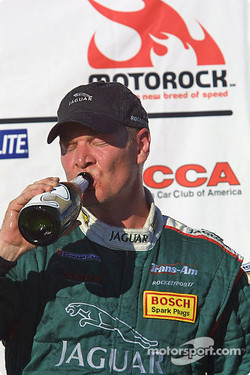 “Tommy Kendall is an excellent addition to our team,” said Beth Paretta, Director of Marketing and Operations – SRT Brand and Motorsports. “It’s fitting that Tommy makes his return to competition as the SRT Viper GTS-R returns to ALMS. He competed in the SRT Viper Cup Series recently at Virginia International Raceway and drove from the back to the front of the field in impressive fashion before a fuel problem relegated him to a third-place finish. His experience as a road racer makes him a strong addition to our team.”

Kendall won four Trans-Am Series championships in the 1990s, competed in the V8 Supercars Bathurst 1000 and made 14 starts in the NASCAR Sprint Cup Series (then Winston Cup). His eighth-place run in Bathurst made him the only American driver to finish the prestigious endurance race.

SRT Motorsports is working with Riley Technologies on the design-and-build process of the new SRT Viper GTS-R race cars. The team will debut in the Mid-Ohio Sports Car Challenge with an eye on competing full-time in the series in 2013.

CORE autosport heads for success north of the border