I am really jazzed to run the prototype this year at Long Beach.

No stranger to Long Beach, Drissi enjoyed his first professional win (Trans-Am) at the track. He has also competed there in the World Challenge Series and in the American Le Mans Series' premier Le Mans Prototype class with Autocon Racing. This week he'll be joined in the Intersport Racing No. 89 X-Men: First Class In Theaters 6.3.11. LMPC car by Kyle Marcelli.

"I am really jazzed to run the prototype this year at Long Beach," said the Trans-Am Champion. "Last year I was able to bring the Autocon team up to 2nd place before our driver change. The team and I where extremely happy with that. We know what we're up against, though. We know we'll have our hands full running against bigger teams with much bigger budgets. But, like I've said before, the guys at Intersport Racing are the giant killers. I know Kyle and I can compete with anyone they throw at us. Bring it!" 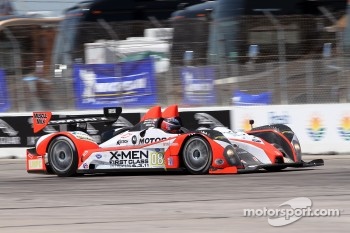 Always ready for a challenge, Tomy will also campaign the No. 5 X-Men: First Class in Theaters 6.3.11. Porsche in the third round of the World Challenge Series on Sunday.

"Running two cars on the same weekend will take a lot of focus," noted Drissi. "The two cars (Prototype vs GT car) could not be any more different. But I'm ready and looking forward to the challenge."

Drissi apologizes following ban: "I let my emotions get the better of me"