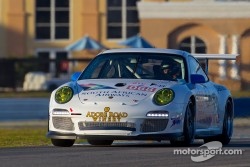 Ludwig, who has driven several events with TRG in the past, will be making his debut at the 12 Hours of Sebring, but is no stranger to success in a Porsche. A long-time veteran of several sportscar categories, Ludwig, like teammate von Moltke, is a proven winner in the Skip Barber series and the GRAND-AM Continental Tire Sports Car Challenge, and a proven leader within the TRG ranks. Known for not only his raw talent but also a strong technical acumen and team leadership, Ludwig will play a key role within the 68.

Also joining the team for his Sebring debut will be Dr. Jim Norman. Running with TRG full-time in the IMSA GT3 Cup Challenge series, Norman was called up to the ALMS ranks after showing tremendous speed during the official Sebring Winter Test in February. Taking a 25-year “hiatus” from racing to pursue a career in medicine, Norman has never competed at this level. A graduate of the Skip Barber National ranks, Norman is not only a proven racer, but he’s also an experienced pilot and drummer. Sponsored by parathyroid.com, Norman has high but realistic expectations for his first full season of competition.

As previously announced, GRAND-AM winner Dion von Moltke will head the charge. Driving under the South African flag, the 20-year old pro driver is a perfect fit for TRG. A three-time winner in the GRAND-AM ranks, von Moltke, just like TRG drivers Andy Lally and Spencer Pumpelly, has driven just about everything in sportscars. From numerous top-10’s in the GRAND-AM Daytona Prototype category, to GT racing at Daytona, to even racing in LMP1 for the American Le Mans Series, von Moltke brings a high degree of experience well beyond his years to compliment his speed. Sponsored by South African Airways and PRNewswire, von Moltke’s rounding out of the 68 lineup should make the car a formidable challenge.

Excited to see a second entry on the roster, TRG Team Owner Kevin Buckler is looking forward to going after one of the last great missing trophies.

“Winning Sebring is on my MAIN bucket list and if we do, it will be the first time a GT team has won all 3 North American endurance races in a row” stated Buckler. “When we signed Dion, we knew we had a super talented driver and were extremely committed to putting the best effort possible for him. Adding Jim and Peter to the mix only furthers the program. Jim has been extremely impressive in winter testing, and overall just a great guy to work with. We look forward to a strong season with him in the GT3 Cup Challenge, and couldn’t be happier to already graduate him to the big leagues! He is committed and I love it. Peter has proven himself within our professional garage time and time again, and I couldn’t be happier to add him to the roster. He’s a really fit, smart and talented driver and a friend. He is very very quick and exactly the guy we want in our car during such a long race. This car and driver lineup has a strong shot to win and we want to make sure all the components are in place.”