It is with sadness that we at Motorsport.com have to report the loss of a very fine gentleman who will be missed in the endurance racing paddock. Sebah Racing team principal, and founder of Sebah Automotive, Hugh Hayden died on Saturday, October ...

It is with sadness that we at Motorsport.com have to report the loss of a very fine gentleman who will be missed in the endurance racing paddock. Sebah Racing team principal, and founder of Sebah Automotive, Hugh Hayden died on Saturday, October 23rd of a suspected heart attack. 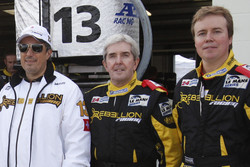 Hayden was in Portugal for Rebellion Racing's preparation for the 2011 Le Mans Series (LMS). The Iberian peninsula was the area for their current post season activities and early testing. At the time of his death, he was racing a go-kart.

Hayden had a wit about him that brought smiles to many of his fellow competitors, his own drivers and team members, the media and the fans. He was also outgoing and friendly to everyone in the paddock.

In 1995, Hayden formed Sebah Automotive and in 1999, the team won the British Superlight championship running Caterham sportscars. They stepped up their game and entered the International scene with GT2 class Porsches and in 2001, Hayden and his two drivers: Bart Hayden and Stephen Earle, landed the team's first podium in the European Le Mans Series endurance race at Autodrom Most, Czech Republic by finishing second.

Hayden also was a man who never gave up and took his team to glory and honor over the years including running in the Le Mans European series and select races in the American Le Mans Series (ALMS) before moving up to the prototype category in the LMS and receiving an invitation to the prestigious and world renown 24 Hours of Le Mans. With this invitation he realized a sportscar team owner's dream.

In 2004 with a Porsche GT3 RS and main driver Xavier Pompidou, Sebah Automotive took the GT2 Team Championship in the LMS. It was not an easy task as the competition was fierce with the JMB Racing Ferrari losing the title by one point and Freisinger Motorsport in a Porsche GT3 RSR adrift by two points. Pompidou did not run the full season but he still finished third in the Drivers' Championship.

Staying in GT2, the British-based Sebah team followed up with their second team title in '05, plus Pompidou and Marc Lieb walked away with the co-drivers' title with a total of 20 points in a hotly contested GT2 contest.

The Sebah team made their debut at La Sarthe in 2006 at the June Classic with drivers Pompidou, Thorkild Thyrring and Christian Ried in the Porsche 911 GT3 RSR but unfortunately they were one of many who did not finish.

In 2007, Sebah Racing teamed up with Alexandre Pesci, CEO of Rebellion Timepieces -- a Swiss company. The team had a new name, Speedy Racing team Sebah and they switched gears to run the Spyker C8 Spyder in the GT2 class with Andrea Belicchi, Jonny Kane and Andrea Chiesa.

However the plans TO run a prototype was in the works and in 2008, they campaigned a Lola B08/80-Judd, moving up to the LMP2 class. They made a team name change to Speedy Racing Team Sebah

The second time they raced at the 24 Hours of Le Mans in June, 2009, they stunned the crowd and their fellow competitor when they finished second in LMP2 in a Lola B09/80-Judd with a superb effort by the team members and their drivers: Kane, Benjamin Leuenberger and Pompidou .

It was also the debut of the team's second car, campaigning in the top LMP1 class. They had to change the gearbox in the Lola Coupe B08/60-Aston Martin so lost a lot of time and did finish the demanding 24 hour contest.

At the end of 2009, the Swiss team announced the team would be known as Rebellion Racing with Pesci listed as owner and Bart Hayden as team manager. Rebellion would provide the engines for two LMP1 Lola Coupes. Under the leadership of both Haydens, father and son, and Pesci, the team took on their new challenge this past season and earned third in LMP2 for the LMS Team Championship.

"With a third place in the Teams' Championship, a second place in the Manufacturers' classification and three podiums this year we shouldn't be disappointed, but we were hopeful of even more. As a team we have grown stronger through the year and, if you look at the pace of our cars in the last two races, we were right at the front of the petrol engined cars. Over the past three seasons we have grown from having one car in the LMP2 class to two cars in the LMP1 class. Over this winter we will be working even harder to raise our performance so that we can target great results next season," said Bart Hayden, the Director for Sebah Automotive.

At the time Bart Hayden gave the above quote, it was the season finale for the LMS this year; little did he know, it would be his father's final race.

If not for his father's dream, Sebah or Rebellion would not have shown the world that one can take on the giants in sportscar racing. Indeed they have and will continue to go up against the diesel powerplants of Audi and Peugeot.

Hayden's passion for the sport led him to start his team back in 1995 and five years later, they are a team to contend with for podiums, race wins and championships. The icing on the cake was winning the Michelin Green X Challenge at the La Sarthe circuit in Le Mans in 2009.

The competitive nature in Hayden was past down to his son, Bart, who is not only a racer but a leader, just like his father. As the team manager, along with team owner Pesci, the two have elected to go on with the testing in Portugal as that would have been his father's wishes.

Motorsport.com extends their sympathy to the Hayden family, to his partner and friend Pesci, to the employees of both Sebah and Rebellion, and to Hayden's many friends. Rest in Peace Hugh Hayden, you will be missed.

While Hayden's passion and legacy will live on, so will the memories.