Beginning at the ALMS season opening event – the 12 Hours of Sebring – Tommy Kendall, Kuno Wittmer and Jonathan Bomarito will share GT-class driving duties in the No. 93 SRT Viper GTS-R, while Marc Goossens, Dominik Farnbacher and Ryan Dalziel will be in the No. 91 SRT Viper GTS-R.

The next step is to see how we stack up against the competition and the 12 Hours of Sebring...

Kendall has also taken on an expanded role within the team. He will join Wittmer and Bomarito for the three endurance events (Sebring, Le Mans and Petit Le Mans) and will serve as an extended team leader and ambassador for SRT Motorsports and the SRT Brand, lending his extensive road-racing experience to the continued development of both Viper GTS-Rs on the track while increasing his role as product spokesperson for the SRT lineup of high-performance vehicles.

Dalziel will join regulars Goossens and Farnbacher for the endurance events.

“SRT Motorsports is truly one team with two cars,” said Beth Paretta, Director of Marketing and Operations – SRT Brand and Motorsports. “The changes we’ve made for 2013 better aligns the dynamics of each driver which we think will enhance the success of each car and the team overall.

Our team chemistry is undeniable and is something we realized the first time we went to the track last year. We feel extremely confident that our drivers are matched well for their strengths which will provide the best results on the track.”

The two SRT Viper GTS-Rs competed in four ALMS races in 2012 and have made a couple of trips to Sebring for testing in preparation for the full 2013 schedule. All six drivers recently participated in the Winter Test at Sebring and are set for the ALMS season opener on March 16. 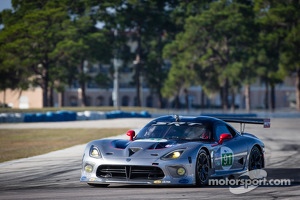 “While we were pleased with the progress of our program in the four races last year in preparation for a full season in 2013, the changes made in the off-season and the two test sessions this year have produced some significant results,” said Gary Johnson, Road Racing Manager – SRT Motorsports.

“The next step is to see how we stack up against the competition and the 12 Hours of Sebring certainly provides that kind of test by challenging both driver and machine for 12 grueling hours. Our two-car team returns to Sebring with a new level of optimism.”

Both cars were also recently invited and accepted invitations to participate in this year’s prestigious 24 Hours of Le Mans.

The Viper’s successful racing heritage began in 1996 with its first racing entry, the original GTS-R, which earned five international GT championships and the 1997 to 1999 FIA GT championships in addition to the three consecutive one-two finishes at the 24 Hours of Le Mans in the GTS class.