Testing continued Wednesday at Sebring International Raceway as American Le Mans Series teams prepare for the 2009 season. Acuras topped the time charts as expected, but the highlight of the day came from Dyson Racing and the public debut of its ...

Testing continued Wednesday at Sebring International Raceway as American Le Mans Series teams prepare for the 2009 season. Acuras topped the time charts as expected, but the highlight of the day came from Dyson Racing and the public debut of its Lola B08/86 Mazda. 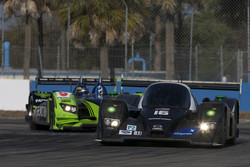 Chris Dyson handled the majority of the driving duties, with team regular Butch Leitzinger expected to hop in tomorrow during private testing. The car is the ex-B-K Motorsports machine, which ran the final two races of 2008 and features some modifications since last year. Marino Franchitti and Ben Devlin were also on hand at the circuit and will likely take turns of the wheel as well.

Dyson plans to take delivery of its second chassis shortly before another test at Sebring next month, while the current car will receive the full 2009 updates package from Lola. The new Lola B09/86 Mazda, as well as all 2009 P2 competitors, will have to conform to slightly modified technical regulations. All cars are now 50kg heavier and have a 10 percent reduction in the engine inlet. Also, teams are forced to run a larger wicker bill on the rear wing, just like GT2 competitors.

"I think 50kg [added] on a P2 car is substantial," Chris Dyson said. "It's a weight that these cars, while they're designed for on a crash test basis, they've not raced at that weight before. It's going to be putting some unforeseen loads on certain components. I think it will be interesting to see how every car that was designed essentially around a 750kg weight limit will react from a reliability standpoint."

Dyson explained that the increased weight will have an affect on lap times, but it will really impact the P2 cars the most since those cars are fundamentally lighter to begin with. P2 entries were also originally mandated to run the ACO's 2009 narrower rear wing, like P1, but IMSA has waived that rule for this year because of the economic climate. 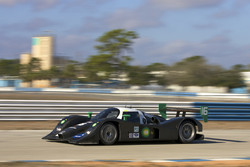 "Obviously, we're going to be fighting hard with the Fernandez guys," Dyson said of the team's competition. "We've had some tremendous battles with them the last few years. We're all playing to the same set of circumstancesI You probably won't see the P2 cars outpacing the P1 cars as regularly as they were, but there still might be occasions here and there this year that they may be faster."

During Tuesday's media day, series President and CEO, Scott Atherton addressed the concern of no GT1 competitors for the bulk of the season. With Corvette Racing only entering its GT1-spec C.6Rs at Sebring and Long Beach, Atherton said the series still remains committed to four categories, but doesn't currently believe there are any new competitors in the pipeline. The series will not allow a non-competitive entrant to race in GT1 just to claim victories. Thus, it's expected GT1 will have no entries for most of the season.

It's quite the opposite in GT2, as ten cars showed up at Sebring for testing this week and more are expected for the season. Porsches led the way over the course of the three days, with three 2009-spec 911 GT3 RSRs in the hands of Flying Lizard Motorsports and Farnbacher Loles topping the time charts.

VICI Racing, another Porsche competitor, showed up Tuesday morning and took to the 3.7-mile circuit with its 2008-spec machine. Now on Michelins for 2009, Richard Westbrook joined regulars Marc Basseng and Nicky Pastorelli behind the wheel of car. The former Porsche works driver has signed with VICI, and the Miami-based team hopes to enter up to three 2009-spec Porsches for the season. 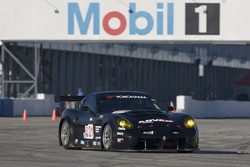 Another driver set to run the full season is Dominik Farnbacher, who was left without a ride following the demise of Tafel Racing last month. Farnbacher spent time in the Panoz Team PTG Esperante this week and has a handshake agreement to drive for the Tom Milner-owned squad.

"The first session was very different," Farnbacher said. "There were some adjustments moving from the Porsche to the Ferrari at the beginning of last year, and this is another one. But things are going really well. The car is pretty soft on the suspension side as it is an older car but that is not a bad thing. We were quickest in one of the sessions Tuesday and the last one Wednesday, and that made everyone happy."

Farnbacher said driving the front-engined Panoz was a completely new experience for him, as the young German has mostly raced mid and rear-engined GT cars in the past. The team hopes to fill the second seat with another professional driver. Ian James and Nathan Swartzbaugh also tested with the team this week.

The only car not to turn laps Wednesday was the LG Motorsports Riley Corvette C6, which left the track following two days of testing. Team owner Lou Gigliotti spent the entire time in the cockpit of his Riley Technologies-built macine and hopes to finalize plans to come back in March. The team has also submitted an entry to the 24 Hours of Le Mans.

Fourteen cars in all took to the track over the three days of testing, gaining valuable mileage in advance of the season-opening Mobil 1 Twelve Hours of Sebring on March 21.