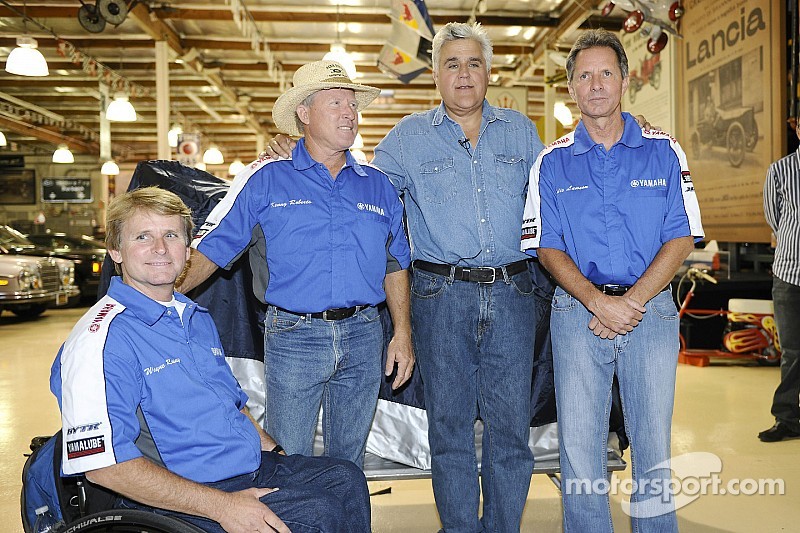 Daytona-based DMG out of the motorcycle road-racing business at the end of the year.

The American Motorcyclist Association has announced that it will sanction MotoAmerica, a new North American road racing series that will apparently replace the current AMA Pro Road Racing Series. MotoAmerica is an affiliate of KRAVE Group LLC, a partnership that includes three-time MotoGP champion Wayne Rainey (at left in photo above with Kenny Roberts, Jay Leno and Eddie Lawson).

Meaning what? Meaning that the Ohio-based AMA, which wanted out of the road racing promotion business in 2008 -- and sold the rights to the series to Daytona Motorsports Group, headed by Jim France and Grand-Am leader Roger Edmondson -- is now, to some degree, back in it.

Dorna, rights holder for MotoGP, is apparently backing the new organization, hoping to rekindle interest in motorcycle road racing in the U.S. Under DMG, the schedule for the AMA Pro roadracing series has fallen to just six events, with no real TV package. Even the Daytona 200 has suffered -- once one of the most important motorcycle races in the world, it's now an afterthought. Whether, or in what form, that race will continue as is remains unclear.

The KRAVE Group is a Costa Mesa, Calif.-based organization that includes Rainey, the three-time 500cc World Champion (1990, 1991 and 1992) and two-time AMA Superbike Champion (1983, 1987), Chuck Aksland, a former racer and 20-year manager of Team Roberts who most recently served as Vice President of Motor Sport Operations at Circuit of The Americas, Terry Karges, a former motorsports marketing executive and team owner who spent 17-years at Roush Performance before being named Executive Director of the Petersen Museum, and Richard Varner, a motorcycle manufacturer, energy sector entrepreneur, philanthropist and businessman.

As an aspect of the reorganization, the Daytona Beach, Florida group that has been controlling road racing for the past seven years is bowing out. In a statement from the AMA: "Daytona Motorsports Group (DMG) confirms the transfer of sanctioning, operational, promotional and commercial rights for professional motorcycle road racing to the American Motorcyclist Association (AMA) and KRAVE Group. Following the 2014 AMA Pro Road Racing season finale at New Jersey Motorsports Park on Sept. 13-14, DMG no longer will conduct and promote the professional road racing discipline. The company will continue to sanction AMA Pro Flat Track, Motocross and Hillclimb."

With its NASCAR influence, DMG tried some innovations, such as using a NASCAR-type pace car, that did not go over well. Factory support sagged from cycle companies. Hopes were high in 2008 that DMG could bring road racing back: "For as long as I can remember, the AMA name has been synonymous with professional motorcycle racing in America," said Jim France, at the time of the sale.

"Our goal is to guide the sport into the mainstream of American culture and showcase the extraordinary abilities of the competitors and their teams," said Edmondson.

The KRAVE (Karges, Rainey, Aksland, Varner) Group owns commercial rights to the MotoAmerica Series, and will award AMA and FIM North America No. 1 plates to series class champions. The group will sell sponsorships, develop other commercial relationships for the series, secure tracks, create the calendar, process crew and media credentials and have responsibility for fan engagement. Rainey was injured in a crash in 1993 at the Italian Grand Prix that left him confined to a wheelchair, but he has remained a vocal and respected part of cycle racing since.

The AMA will staff officials at each round of the professional series and develop an enforcement, appeal and rider license procedure. The AMA will be responsible for issuing professional road racing licenses for the series.

MotoAmerica, in consultation with the AMA, will develop classes, the rules of competition and event procedures. While details of the rulebook are still in development, classes and events will conform to prevailing international standards.

"The structure of our agreement with the AMA serves the goal of developing riders to be successful on the world stage," Rainey said in a prepared statement. "It allows a framework that supports advancement from youth competition to novice, from novice to Pro-Am, from Pro-Am to National Championship contention and, for the best of the best, an opportunity to race for a world title.

"The AMA's roles as FIM affiliate and amateur sanctioning body make it a critical piece to establishing a clear progression for America's road racing community," Rainey said. "We're eager to build a fair, exciting and commercially viable professional road racing series not just for today's stars, but for those who will stand on top of the podium for years to come."