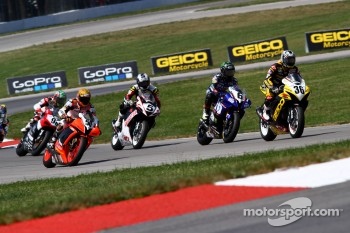 Cardenas had a bike issue in one of the Barber races and ran strong at Ohio but the slightest of errors meant Beaubier was able to pass him late and win on Sunday. Beaubier has made great strides this year and to top Cardenas in a straight fight even once is a significant achievement.

That set the stage for another battle at the Red Bull U.S. Grand Prix at Laguna Seca, with the usual gang of GoPro Daytona SportBike gladiators looking to usurp glory from Cardenas and Beaubier.

The conditions were tough and the track time minimal after the Monterey fog played havoc with the schedule but Cardenas won pole with a lap of 1:25.575 and was joined by Tommy Hayden (Y.E.S./Graves/Yamaha YZF-R6) and Beaubier on the three-rider front row. Those three riders got away first of the start and then Dane Westby (M4 Suzuki GSX-R600) saw his string of first or second place finishes end at four when he highsided his bike on lap one. He was able to remount and continue the race, which meant Westby would continue to hold second place in the Daytona SportBike points.

Beaubier had a good view of two fast veterans for much of the race. Cardenas led but Hayden, who won the AMA Pro National Guard SuperBike race at Laguna Seca in 2011, was quicker in some spots and looked content to follow until the end.

By lap six, Bobby Fong (Meen Motorsports Yamaha YZF-R6) was able to join the leading trio. Through the middle of the race, there weren't many moves attempted at the front, but there were a lot of looks. At halfway, Beaubier decided to make a move on Hayden, getting a good run up the hill and making the move entering the Corkscrew.

Jake Zemke (Ducshop Ducati 848) closed in with seven to go and was just off the leading four.

"Hammer Time" came with four to go, the same time the leaders hit some lapped traffic. Beaubier tried to make a move around the outside in turn four and five, but Cardenas was having none of it. Seconds later, Fong crashed in turn six to end his run. Beaubier was right on the tail of the 36 bike but Cardenas had all the obvious passing areas covered. It was going to take a move similar to the one Beaubier made at Mid-Ohio; a move in a spot that Cardenas wasn't expecting.

It happened in turn two on the last lap. Beaubier got a good run out of the final corner and continued down the straight, but was able to get his Yamaha slowed and positioned on the inside for the second part of turn two. Cardenas hit the corner hot and left the slightest of gaps. It left just enough room for Beaubier to take the lead.

"Martin made a little mistake coming out of the last corner and I was able to pass him into two," said Beaubier. "I was riding a little impatient in the middle of the race, trying to get around Tommy and showing Martin a wheel here and there. I felt like I could get in there pretty good but to tell the truth I did not plan that move. I saw the opportunity."

Cardenas didn't win but now leads the points by 64. "Cameron made a good move to pass me," Cardenas said. "I was expecting him to try something in turn five and I had an idea of how to shut the door, but he surprised me in turn two and made the pass. I wanted to try to get back around him because I felt the race was ours, but I also didn't want to give anything more away. He had just enough cushion that he was able to hold the position. Aside from that, it was a perfect race for us and we are happy."

Hayden had the fastest lap of the race but somehow didn't quite get the finish he wanted.

"The race went pretty smooth and I was in a position I wanted to be in," said Hayden. "I was pretty confident that if I got with the leaders, I could run the pace to win. Some places, I was a little faster than Martin, others he was quicker than me. The areas I was faster were the areas where you couldn't pass. I was a little disappointed because halfway through the race I thought I had a better chance of winning than I did at the end. I'm not completely satisfied."

Zemke earned fourth place and took another fine finish for the Ducshop Ducati team just a shade over three seconds back. It's the fourth time this season Zemke has finished fourth.

Jake Gagne (RoadRace Factory/Red Bull Yamaha YZF-R6) was fifth in another crazy race for the luckless Californian. Westby banged him hard on lap one when he crashed and Gagne then had another moment one corner later. After the race, the 132 bike was battered and Gagne's ankle swollen but he had a top five finish to show for it.

With a month off before the series renews the hostilities at New Jersey Motorsports Park, it is time for the GoPro Daytona SportBike regulars to gear up for the 2012 stretch run.

Point Standings (After Round 8)

Gagne steps in for injured Bradl at Magny-Cours