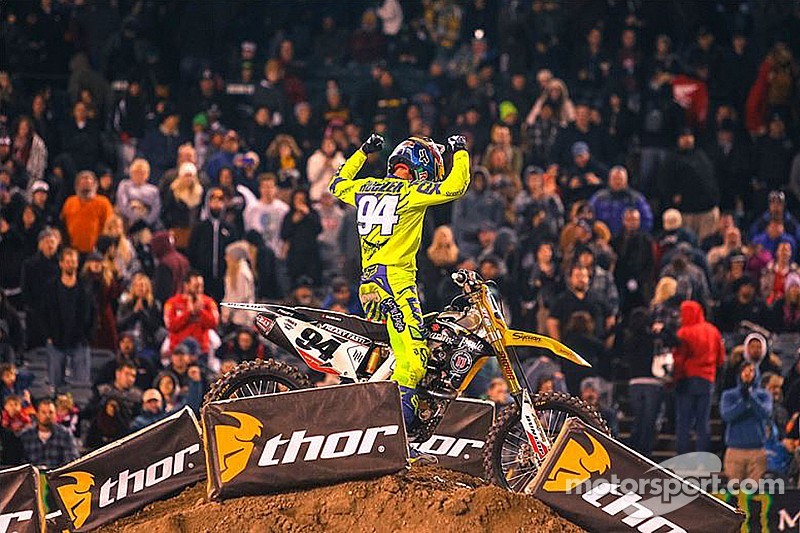 Ken Roczen has made his presence known with Ryan Villopoto no longer a threat.

Like last year, Roczen will bring the 450SX Class points lead into Phoenix's Chase Stadium this Saturday night. In the Western Regional 250SX Class Troy Lee Designs/Lucas Oil KTM's Jessy Nelson, who had never made a podium appearance, won the first Main Event of the season and his career.

Alessi with the holeshot

Smartop Motoconcepts Racing's Mike Alessi grabbed the early advantage in the 20-lap 450SX Class Main Event by racing to the SupercrossLive.com Holeshot Award with BTO Sports KTM's Andrew Short and Roczen in tow. By the end of the opening lap, Roczen secured the lead and rode to the third win of his career.

"Everything has been awesome with the team and it's good to get the first win out of the way, both for myself and for them," said Roczen. "There are a lot of good guys out there so I'll need to stay consistent [this season]. It's good to come out of here healthy and we'll just keep the ball rolling."

Short's hold on second was also short lived as rookie Anderson took over the position aboard his Rockstar Energy Husqvarna Factory Racing machine on Lap 2. Eventually Team Honda's Trey Canard took third away from Short on Lap 9 and the top three remained the same for the final 11 laps.