DAYTONA BEACH, FL (March 10, 2011) - Fifty entries have been filed for the 70th running of the legendary Daytona 200 AMA Pro Daytona SportBike race. The 57-lap contest will go green this Saturday afternoon on the 3.51-mile Long Course that combines Daytona International Speedway's high banks with its twisting infield course. This year, the classic race will be televised live on SPEED from 1:00 to 3:30 p.m. Saturday, March 12. 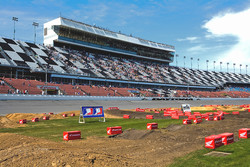 Dating back to 1937, when Ed Kretz won the fist Daytona 200 on an Indian, this world-class race has served as the opening event of the American road race season. In keeping with tradition, the 70-year-old contest will again kick off the current AMA Pro Road Racing season, and with 2010 class champion Martin Cardenas having moved to AMA Pro National Guard SuperBike this year, the field is wide open.

Taking over the 200 reins for Team M4 Suzuki in Cardenas' absence will be Dane Westby, who stunned many by claiming second in last year's Daytona 200 contest after leading twelve laps. Jake Zemke, who won both Daytona AMA Pro National Guard SuperBike races last year, will return to middleweight competition with the Project 1 Atlanta team, the talented Californian representing a big unknown for other riders in the class.

One of the bigger storylines in this year's Daytona 200 is the return of Kawasaki to the storied event, the green machines piloted by Team Cycle World Attack Performance's Eric Bostrom and 2010 AMA Pro SuperSport East Division Champion J. D. Beach. Eric will be doing double-duty this weekend, representing in the SuperBike class as well, while J.D. will be making his Daytona SportBike debut after a tremendous 2010 season that saw him earn eight victories.

As if the field wasn't yet deep enough, Jason DiSalvo returns to AMA Pro competition this year after running several 2010 World Supersport events, having joined the very capable Team Latus Motors Racing (which took third in last year's Daytona 200 event). P.J. Jacobsen remains with Celtic Racing for 2011 but will roll out on new machinery, the team having re-formed as a Fast By Ferracci-supported Ducati effort. And in addition to his SuperBike duties, Geoff May will be representing Erik Buell Racing in the 200.

The Vesrah Suzuki team returns with Cory West---- a consistent Daytona SportBike frontrunner last year---- and new team member Taylor Knapp, who finished seventh in last year's SuperBike championship as a privateer. Joining Herrin and others in the Yamaha attack will be Tommy Aquino, now with support from Yamaha Extended Service and Pat Clark Motorsports, and the HT Moto- and Yamalube-sponsored Melissa Paris.

Joining the AMA Pro road race lineup at the famed Daytona International Speedway will be a host of fan-specific activities and events including demo rides, offerings in the Daytona Motorcycle Marketplace (located in the Midway, D5X, and Lot 1 display areas), live entertainment, games, contests, and more. AMA Pro Fan Walk sessions will also take place on two occasions over the race weekend, during which fans will be able to circulate on pit lane to visit with AMA Pro riders and teams from every class.

High stakes for the penultimate round at Magny-Cours

WSBK action resumes at Jerez for Round 10