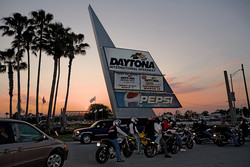 If anyone can rival Hayes in the determination department, it's championship runner-up Hayden, who took his maiden SuperBike win last year and went on to add four additional victories (plus ten additional podium finishes) to his 2010 tally. Equally as determined is the powerhouse Rockstar Makita Suzuki team itself---- which is working to return to the SuperBike title-dominance it exhibited pre-2010---- and Hayden's teammate, 23-year-old Blake Young, who had his '10 season abbreviated by injury.

Joining the established SuperBike frontrunners will be 2010 AMA Pro Daytona SportBike Champion Martin Cardenas, who's made the move to AMA Pro SuperBike with his title-winning M4 Suzuki team and teammate Chris Ulrich. Martin rolls into his new class with a spectacular season behind him---- one that included a staggering nine wins and a total of thirteen podium finishes. Though sidelined by injury late in the season, Ulrich had a strong year in 2010 SuperBike, finishing consistently within the top ten.

The Michael Jordan Motorsports/National Guard Suzuki effort, which led the SuperBike points chase for the first part of 2010 after winning both 2010 Daytona SuperBike races, returns this year with an all-new lineup. Former national superbike champion Ben Bostrom (who also scored a win at last year's Mazda Raceway Laguna Seca round) will pilot the #23 Jordan Suzuki bike, while Roger Hayden, having returned from a season in the World Superbike paddock, will field the #54 National Guard Jordan Suzuki.

Larry Pegram, who also scored a SuperBike race victory in 2010, made an equipment change over the off-season and returns as a BMW effort, again with support from Foremost Insurance. Larry's strong win at Auto Club Speedway in 2010 was supplemented by five additional podiums, adding up to a fifth overall in the series. Get a behind-the-scenes look at Pegram's effort via Superbike Family, which began airing on Discovery's HD Theater in February and will air again on March 12.

Another significant equipment change, though it could be labeled a return of sorts, is represented by Cycle World Attack Performance Kawasaki rider Eric Bostrom, who's spearheading the return of Kawasaki to the high banks of Daytona. In additional to contending both SuperBike races, Eric will compete in the Daytona 200 alongside teammate and AMA Pro SuperSport East Division Champion J.D. Beach.

Geoff May returns for a full AMA Pro SuperBike season this year aboard the Erik Buell Racing machine. May rejoined 2010's calendar at Infineon Raceway, turning in several top-ten finishes throughout the second half of the year. Canadian Chris Peris will also be back in the AMA Pro SuperBike paddock, fielding a BMW for Team Iron Horse.

The two 15-lap SuperBike races will take place on Daytona's 2.9-mile Short Course, and will be accompanied by the 70th running of the Daytona 200, featuring the Daytona SportBike class, as well as the Motorcycle-Superstore.com SuperSport and Vance & Hines XR1200 divisions.

Also joining the AMA Pro road race lineup at the famed Daytona International Speedway will be a host of fan-specific activities and events including demo rides, offerings in the Daytona Motorcycle Marketplace (located in the Midway, D5X, and Lot 1 display areas), live entertainment, games, contests, and more. AMA Pro Fan Walk sessions will also take place on two occasions over the race weekend, during which fans will be able to circulate on pit lane to visit with AMA Pro riders and teams from every class.

Another activity not to be missed is the March 12 "Spring Dash at Daytona"---- the chance to do two laps around Daytona International Speedway after the checkers have been thrown on the Daytona 200. For tickets and additional information, visit the Spring Dash Ticket Booth located in Thunder Alley.