DAYTONA BEACH, FL (March 8, 2011) - The 2011 AMA Pro Motorcycle-Superstore.com SuperSport series has gotten off to a great start even before the season officially kicks off March 10-12 at Daytona International Speedway, with new young-guns joining the middleweight division and class sponsor Motorcycle-Superstore.com announcing their sponsorship of the Year-End Points Fund. 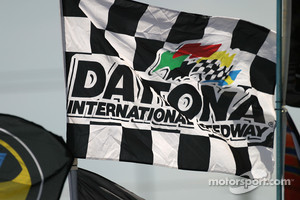 Last year's season opener at Daytona saw some of the best racing of the AMA Pro Road Racing weekend---- as proven by a SuperSport Race 1 victory margin of 0.001 of a second---- and with a number of new riders stepping up to replace those who've graduated to this year's Daytona SportBike division, the 2011 season will allow for maximum opportunities to spot rising stars in the sport. Of the six riders who won races last year, in fact, only two will be familiar to SuperSport watchers this season: Elena Myers and James Rispoli.

Myers made history last year with her victory at Infineon Raceway, becoming the first female in road race history to win an AMA Pro event. Elena went on to take second in the 2010 AMA Pro SuperSport West Division Championship, and she returns this year aboard an M4 Suzuki with support from SuzukiScoopFans, a new Facebook activity from Suzuki.

James Rispoli, who earned victory at the New Jersey Motorsports Park round, finished fifth in the 2010 East Division championship despite missing several rounds and contending a handful of 2010 AMA Pro Flat Track events. James will again be aboard an ANT-Racing.com Suzuki, with additional support from STAR School, NationalGuard.com, and the Shatki Warriors.

Another returning 2010 frontrunner is LTD Racing Yamaha's Tomas Puerta. Tomas finished third in the 2010 East Division points standings with a trio of second-place podium finishes and a pole position at Mazda Raceway Laguna Seca. This year, Tomas' championship hunt will have additional support thanks to Yamaha Extended Service. Tomas will be joined on the LTD team by David Gaviria.

Also returning to the Motorcycle-Superstore.com SuperSport class is Eric Stump, who took a third-place finish at the 2010 New Jersey event, turned in six additional top-ten finishes, and competed in three AMA Pro Vance & Hines XR1200 rounds, taking a third in the inaugural race at Road America. Eric will be piloting a Yamaha with support from Markbuilt Race Bikes and Crossroad Powersports.

Miles Thornton, who notched five top-five finishes in 2010 East Division competition, will be looking to move his Yamaha up the chart this year with support from Arai, Sidi, and Held USA. Johnstown, Ohio's Eric Kerr will also be back for 2011, he and his family-run team fielding a Yamaha with support from RFC, Digital Impressions, and MJ USA.

Michael Corbino, who competed as a Top Gun racer last year, will roll his Paws Inc. Yamaha up to the Daytona start-line come the weekend, as will LTD rider Sam Nash, who ran a limited number of races in 2010 and is looking to step it up in 2011. They'll be joined on the grid by Corey Alexander, who began his AMA Pro career at Virginia International Raceway just last year and has returned with support from Vesrah Suzuki and STAR School.

One to watch will be Benny Solis, who first gained national-level attention as a rider in the former Red Bull U.S. Rookies Cup youth series, and who will contend Daytona aboard a Honda run by Erion Racing with additional support from Red Bull and Roadracingworld.com. Another young rider well worth watching is Jake Mormon, a fellow Rookies Cup vet who will be making his AMA Pro SuperSport debut.

Joining the AMA Pro road race lineup at the famed Daytona International Speedway will be a host of other activities and events including demo rides, offerings in the Daytona Motorcycle Marketplace, live entertainment, games, contests, and more. AMA Pro Fan Walk sessions will also take place on two occasions during the race weekend, during which fans will be able to circulate on pit lane to visit with AMA Pro riders and teams from every class.