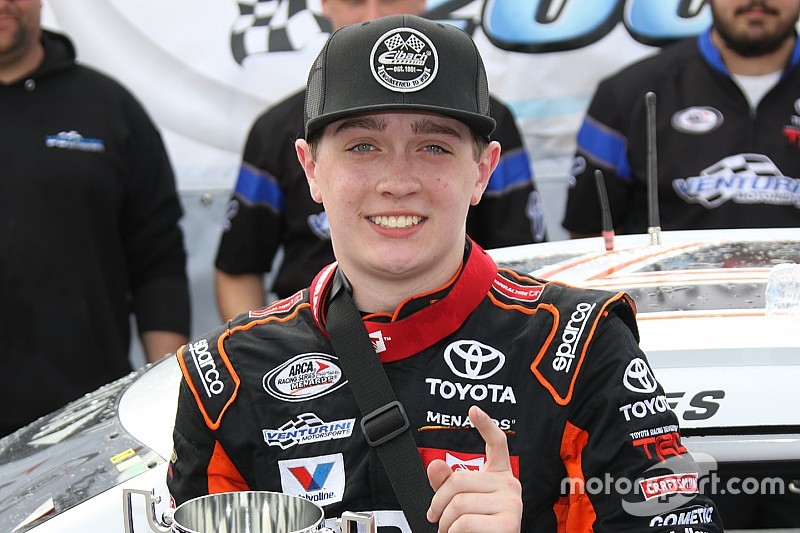 Christian Eckes’ busy 2019 racing season is off to a good start.

Eckes used a lap at 183.001 mph during his group qualifying session Friday to win the pole for the ARCA Racing Series season opener Saturday afternoon at Daytona International Speedway.

The pole is Eckes’ third of his career and first on a superspeedway. This is the first year Eckes, 18, was old enough to compete at Daytona and Talladega.

“We brought a very fast car and we really didn’t show it (in practice) yesterday,” Eckes said. “But we showed it today when it counted and hopefully we’ll show it tomorrow, too.

“It always how you hope to start the weekend out – with the pole. I can’t wait for tomorrow. We got 80 more laps to do this. It’s not just about one lap in my mind. We’ve got a lot of work to do yet.”

In a race that has traditionally proved very unpredictable with multiple cautions, Eckes said the front row starting position is coveted.

“As long as we’re not in the back where all the carnage happens, it’s always a good day,” he said. “To start on the pole, it really helps us out the whole race. Hopefully we can stay up there through pit strategies and everything.

“I feel really confident in our chances.”

Thad Moffitt, the grandson of NASCAR Hall of Famer Richard Petty, qualified second, Leilani Munter was third, Willie Mullins was fourth and Harrison Burton, who is competing fulltime in the Truck Series this season, completed the top-five.

“A lot of family legacy at this track alone and a lot to live up to,” Moffitt said. “Racing here for the first time is kind of surreal because everyone in my family who’s been in a race car, has raced here and everyone who’s driven a race car has won here.

“We’re starting off on a good note and hopefully we can get the deal done tomorrow.”

Munter announced last month that she plans to retire from her motorsports career following the Dayton event.

“Now I can feel like I can relax. I was most nervous pulling the number for qualifying because so much of qualifying here depends on what group,” she said. “I was pretty nervous about that. But we pulled a great group and had a great run.

“I am hoping we’ll have a good, clean race and if we were to come home with the win, I think it would be the perfect way to end my career.”

Michael Self, who won this event a year ago, will line up sixth. Completing the top 10 are Natalie Decker, Travis Braden, Andy Seuss and Connor Hall.