Daytona Beach, Fla. – Grant Enfinger powered to the front early-on and came home the winner of the Lucas Oil 200 presented by MAVTV American Real at the Daytona International Speedway. The race opened the season for the ARCA Racing Series presented by Menards.

The winner drove the Motor Honey-Casite-Advance Auto Parts Ford, giving Ford its first victory in this event since 2001.

“Our race didn’t start here; it started in testing in December,” Enfinger said. “We had a really, really good car. We qualified good and in starting second, we managed to stay up front all day and was able to pull it out. To win here is incredible for all of us.”

Reacting to a restart with 10 laps to go, Enfinger commented, “I wasn’t crazy about it but I made the right lane choice and never had any issues. I am very blessed with what I am able to do for a living.” 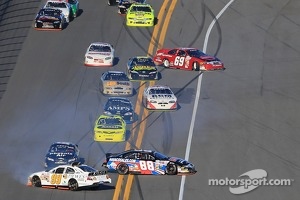 Enfinger led 42 of the 80 laps run, including the final 29 circuits. For the Alabama native, he took his third ARCA win.

Frank Kimmel, the 10-time ARCA champion, finished runner-up for the third time, to leave him winless at Daytona. He drove a Toyota. Clay Campbell, the president of the Martinsville Speedway, drove superbly to finish third in the Federated Auto Parts Chevrolet owned by veteran driver Kenny Schrader. Kimmel had hoped Campbell would push him past the leader, but the latter wasn’t taking any chances. Tommy Hessert took fourth in a Dodge and Tyler Reddick came in fifth in another Dodge. Sixth place went to eight-time race victor Bobby Gerhart. The Daytona specialist qualified fast but when his car failed technical inspection, he was forced to start last. An early-race scrape with a wall slowed his run, but he maneuvered his way to the front as the race wound down.

An early-race wreck eliminated nine of the 40 starters.