Gallagher dominates ARCA, but Mitchell gets by for first win 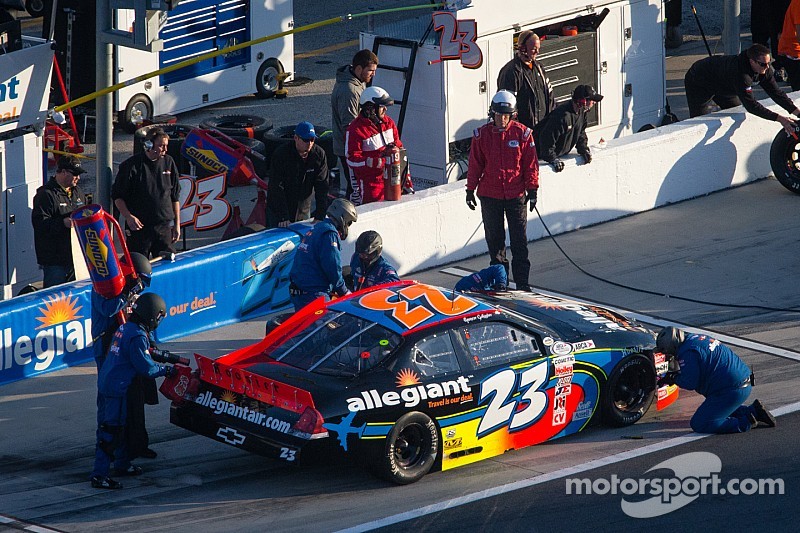 Mason Mitchell had been so close to celebrating in victory lane that when he finally won he had one reaction: "Is this really happening?"

It really was. Mitchell scored his first ARCA Racing Series presented by Menards victory by winning the Ansell ActivArmr 150 at Chicagoland Speedway Saturday afternoon. Mitchell has finished second place four times this season - all to different drivers - but put an end to that by taking the lead at Chicagoland with six laps remaining and sailing into victory lane. Spencer Gallagher (in photo from a previous event) led the first 70laps, but ended up sixth.

"Coming to the checkered flag, I just didn't want to jinx it," said Mitchell, 20. "I couldn't believe it. Once I knew that it was over, we had to celebrate the right way."

Mitchell got a bath in Gatorade when he got out of his No. 98 Musselman's-Wildlife Foundation of Florida-TTS-Applebee's Ford.

"The whole crew, everybody on the crew, from the crew chief to the car chief, everybody, just kept digging," Mitchell said. "All year, they've been working so hard. To finally put it together a win is amazing. I'm so excited right now."

Justin Boston, in the ZLOOP-Venturini Motorsports Toyota, finished second. Mitchell passed him with six laps to go after a caution for debris on the track changed the course of the race. Boston held the lead when the green flag dropped and was running a low line, near the bottom of the track. Mitchell, meanwhile, held firm on his line near the top and slowly gained on Boston.

"The bottom didn't work for us all day," Mitchell said. "The top is where we were best."

After he got past Boston, Mitchell had a clear view ahead of him to victory lane.

Matt Tifft, the SCOTT Rookie of the race winner, finished third in his first trip to a 1.5-mile track. Will Kimmel was fourth in the Messinas-Circle Track-Ingersoll Rand Ford and Cody Coughlin fifth in his JEGS Toyota. Coughlin was also making his first start at the track.

Spencer Gallagher led 70 laps before the handling on his car went away. He took the lead on lap three from Will Kimmel and stayed there until lap 72. He finished sixth.

Gallagher had started second in the race behind Menards Pole Winner John Wes Townley. Townley crashed on lap 23, ending his day. Austin Wayne Self, who crashed during qualifying, also crashed during the race, bringing out one of the six cautions.

Kimmel had a top five finish despite not having third gear on the restarts.

"I didn't have third gear," Kimmel said. "I had to go from second to fourth. On the restarts I just couldn't do anything. Once I got to fourth, the car was fast. We probably had a second-place car. I'm not sure what we had for the No. 98, but we had a fast car."

The rest of the top 10 included Grant Enfinger in seventh, Justin Allison in eighth, Tom Hessert in ninth and Frank Kimmel in 10th. Josh Williams and Leilani Munter also stayed on the lead lap, finishing 11th and 12th.

Mitchell's victory came in his 35th career start and, in doing so, he took over the series point lead.

His father, Russ Mitchell, held his celebration until his son had passed the start finish line, winning the race.

"There are so many things that have happened, I wanted to wait to make sure we got it done," Mitchell said. "I'm just so happy for this team. It never gave up. It's the proudest day of my life."

The ARCA Racing Series will return to Lucas Oil Raceway next week for the SCOTT Get Geared Up 200 presented by Federated Car Care Friday, July 25, live on FOX Sports 1.