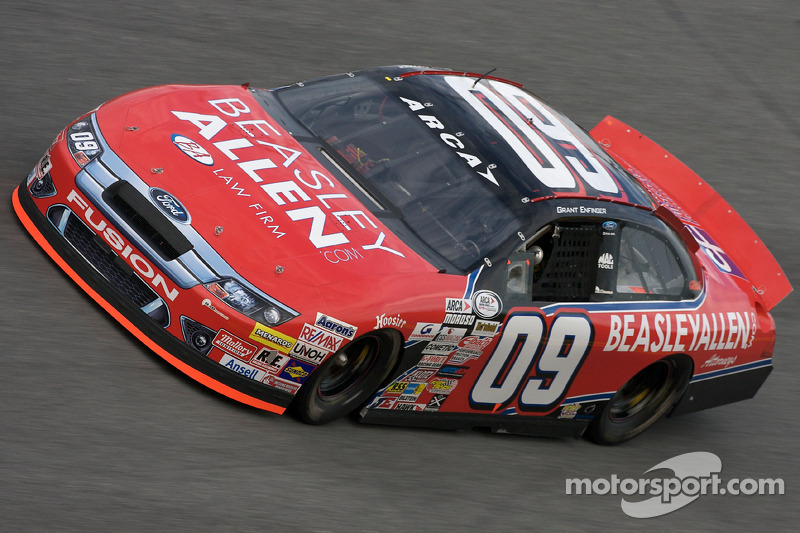 Justin Boston finally got 'The Kiss.'

"This is great to be here," Boston said. "I'm not sure what to say even. So many times we've missed this; it's good to finally get the win."

Boston took the lead from Grant Enfinger (in photo, in a previous race) on lap 181 in the Menards 200 presented by Federated Car Care and held off a charge from Menards Pole winner Mason Mitchell to win. It was Venturini Motorsports first win at Toledo since Bill Venturini himself went to victory lane in 1987.

"I can't thank all of the guys at Venturini and back at the shop enough for this," Boston said. "All I had to do was drive the car. It was fun to drive this car today."

The race was over in just one hour and 15 minutes with only four cautions for 32 laps. Matt Tifft, in the Crunch'N Nutter Chevrolet, was not only the SCOTT Rookie Challenge winner, but he finished third in the race, just ahead of team owner Ken Schrader, who finished fourth in the Federated Auto Parts Chevrolet. John Wes Townley, in the Zaxby's Toyota, finished fifth in another Venturini car. Cody Coughlin, also in a Venturini car, was sixth in the JEG's Toyota, the first car a lap down.

Frank Kimmel cut a tire late in the race and finished 14th, the first time out of the top 10 in 37 races.

Mitchell, however, in the Thermal Technologies Services Ford, finished in the top 10 for the 14th straight time.

"We just couldn't get up there at the end," Mitchell said. "We were definitely fast, probably the fastest car. I just made a few mistakes there during the race and cost us some track position. I tried to just stay calm and try and get to the front. We just came up a little short."

Tifft, who had a huge cheering section in the grandstands, was happy with his finish.

"It was fun running with Kenny all day," he said. "It was great to be able to stay in front of him. We were set up for the long runs really well. We had a good day today."

Kimmel, Spencer Gallagher and Josh Williams all had a tire go down late in the race. Kimmel said it was just a matter of the tires being abused.

"We usually don't have such long runs like that," Kimmel said. "We were just abusing those tires today."

Coughlin finished just ahead of Justin Allison, who had a career-best finish of seventh. Austin Wayne Self was eighth, Michael Lira ninth and Karl Weber in 10th.

Mitchell edged point leader Grant Enfinger for the most laps led, 69 to 67. Enfinger led from laps 115 to 177, but went a lap down late in the race, finishing 12th.

Schrader said his team struggled all weekend on the car, but was happy with the top-five finish.

"I will tell you what," he said, "The big winner today was the people in those grandstands. It was a great day at Toledo and a big turnout. The crowd saw a good race today."

Boston, meanwhile, had a near flawless day in winning his first ARCA race. It was a big day for the team, which has had several misfortunes early in the season, despite winning a pole at both Mobile Speedway and Salem Speedway. He was the SCOTT Rookie of the Year in 2013 and came into this season with Kevin Reed as his crew chief of the No. 25. Reed had six wins last year.

"I'm pumped for this," he said. "We should have been here before, but we'll take it."