On the road again, next stop: ARCA Michigan

Ready for a road trip, Motorsport.com Photographer Jay Alley is heading to Michigan.

My lady friend and greatest supporter outside my family often calls me the "Energizer Bunny", and not because I use their batteries in my camera gear (which I do). She also calls me a madman because of the pace I work and the schedule I keep. Last week a teaching colleague called me "The Machine", which was a new one, but I like it. As an old TV commercial pitch man used to say, "I don't care what you call me as long as you call me."

This week I am called to Michigan International Speedway to fill in for the chief photographer at ARCA. This is a wonderful opportunity to support a racing series which is among the most varied on the planet. This trip is sandwiched within a visit to Akron, Ohio to help my Mom, so I will be logging some serious miles on the road to Indiana-ville over the next few days. Veteran Frank Kimmel currently has the season points lead and seems ready to finally snag his 10th ARCA series championship. 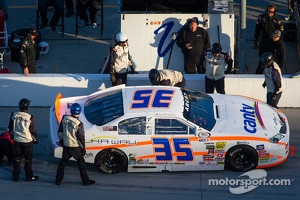 Milka Duno in the pits with issues

Kimmel will be challenged by the usual assortment of young guns, future stock car racing stars, and older veterans who just love to race. This past weekend, Chase Elliott, one of those talents on the rise and son of NASCAR legend Bill Elliott, won at Pocono. With the wide open high banks of Michigan holding the promise of two- and three-wide racing, 100 laps for the ARCA contingent should be fun and exciting to shoot.

Going to Michigan is sort of a homecoming for me as my first race there was in 1981 at the CART Michigan 500 and several of us from Indy regularly made the trek to MIS for the Indycar races over the years. Sprinkle in a few NASCAR races in the '90's, and I've probably shot 25 or more races there. This week will mark my first time back at MIS since 2007 when Indycar Last ran there. I know I'll have a busy two days shooting this week and hope I can do a good job filling in for my friend Doc Hunter.

Once my duties during the ARCA 200 miler are finished Friday night (you can catch it live on SPEED at 5 p.m. Eastern), I will be back on the road to Akron to be with Mom as she deals with a serious medical issue. Prayers for her would be appreciated. She's a great race fan and comes by it naturally as her father, (and my namesake) Jay Shue, helped get a dirt track built in her hometown of Warsaw, Indiana, at the county fairgrounds after World War II. Her recent physical difficulties kept her away from the Indy 500 this year, much to her dismay, but she's got the family's "Shue grit" and proudly goes racing when she can. Pretty good for a 78 year old, little white haired lady - once a racer, always a racer.

That's it for now until I get to the racetrack, so I will see you at Michigan, or in Akron, or somewhere on the road soon.