MOORESVILLE, N.C. (March 3, 2011) - Everything is different for Patrick Sheltra in 2011. While the 2010 ARCA Racing Series champion works to continue his career in the top ranks of NASCAR, he has a new role on his Sheltra Motorsports team in the ARCA Racing Series- team owner and driver coach. 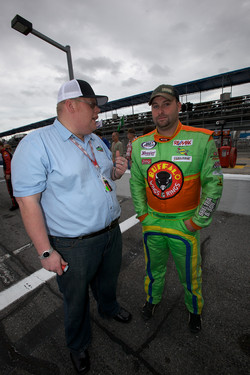 While the 24-year-old driver is learning his new role at Sheltra Motorsports in 2011, there is no question where Sheltra belongs- behind the wheel of a racecar. Often described as an "old-school" racer, Sheltra's talent, aggressiveness, and ability to bring his racecar to the front of the field has drawn the attention of some of the top teams in NASCAR.

"I'm not only a driver, I'm a racer, and throughout my racing career I think I've proven that I'm going to do what I have to do to get the job done, no matter what it takes," said Sheltra. "At the end of the day it's about winning and being consistent, whether it's the race or the championship, and that's what I'm going to do."

While his sights are set on progressing through the ranks of NASCAR, the talented driver is using his skills to help the up-and-coming drivers on his Sheltra Motorsports team while waiting on the right opportunity in NASCAR.

"I'm enjoying the ownership role with Sheltra Motorsports," explained the 2010 ARCA Champion. "It's nice to be able to help Milka (Duno) prepare for heavier stock cars. There are some other up-and-comers looking to join our program this year, and we're excited to be able to work with them and provide them with a competitive opportunity. Milka had a good run at Daytona, and we are looking forward to keeping that momentum going into Talladega with her."

While Sheltra is learning to enjoy the role of team owner, his priorities, goals and talents lie behind the wheel of a racecar, and he is using 2011 as a steppingstone to a long, successful career in NASCAR.

"We're working on a few things for this year and have some promising opportunities coming up for the Truck Series and the Nationwide Series," said Sheltra. "The economy is still very tough, but we're confident that we'll be back on the track soon. My goal is to run as many races as I can to basically showcase myself to other teams and sponsors in effort to find a solid ride and compete for wins. I'll get there. I promise you."