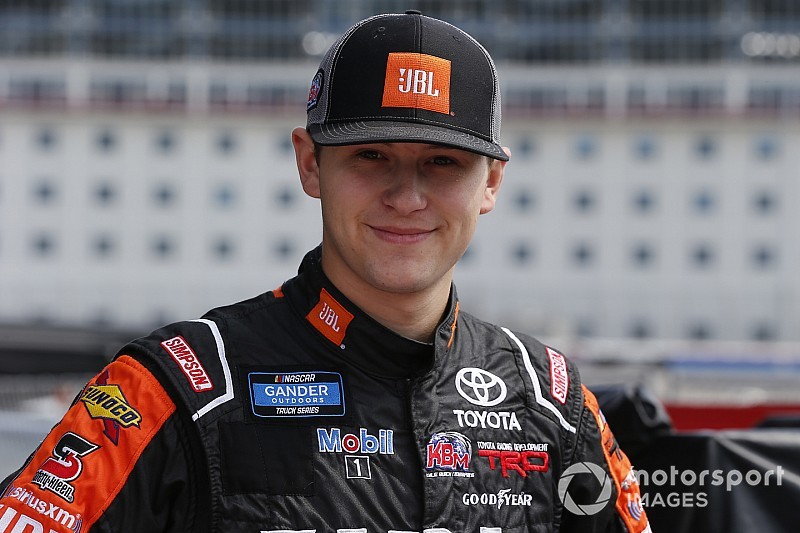 Todd Gilliland’s trip to Victory Lane at Talladega (Ala.) Superspeedway couldn’t have come at a better time.

Once Gilliland got the lead in Friday’s ARCA race, he refused to relinquish it and held off Riley Herbst to earn his second career ARCA victory.

The win is the first for Gilliland of any kind since his victory in the NASCAR K&N Pro Series East race at Bristol in April of last year.

“Man that was incredible. It was such an amazing race,” said Gilliland, 18, who competes fulltime in the Truck Series for Kyle Busch Motorsports. “This car was incredible. Nobody could catch me and they were doing all they could.

“All the credit goes to these guys at DJR-Crosley. We were going to destroy them at Daytona (in the season opener). I’m so happy I got to run here, it was kind of last-minute. It’s been a long time since I’ve won and this trophy is amazing.”

Gilliland’s Truck team owner, Kyle Busch, has said the Toyota development driver was on the “hot seat” this season and needed to improve his performance.

“No matter how small or big a victory, it’s huge,” Gilliland said. “My confidence has probably never been lower than going into this race but I’ve got so much confidence in these guys. I need to work on my Truck program a little bit, myself and my whole team.

“Hopefully, I can something from this over there. Now, we just need to win a Truck race – or a few of them. Those are way more important.”