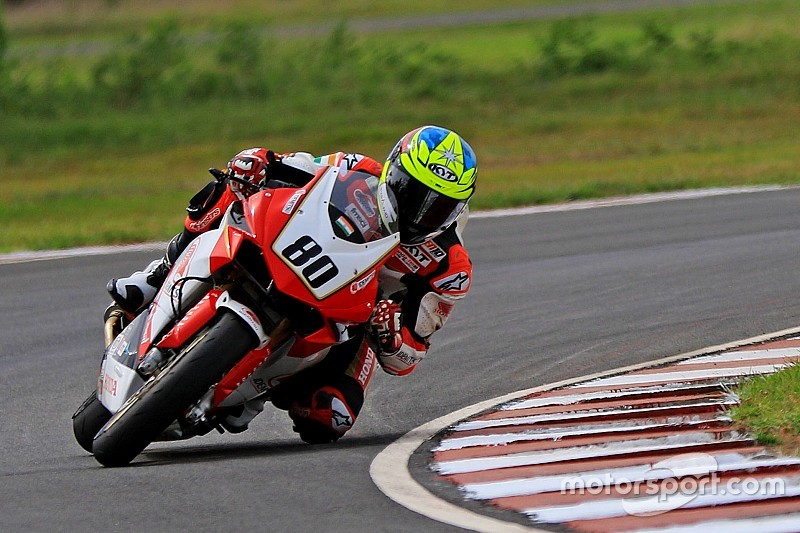 Rajiv Sethu secured a points finish in the India round of Asia Road Racing Championship, while Taiga Hada brought more joy for Honda Racing India with a podium in his class.

Competing in the mid-tier Asia Production 250cc category, Sethu qualified 19th on the grid with a time of 1m51.177s at the Madras Motor Race Track.

He slowly but steadily moved up the pack in Saturday’s Race 1, jumping up to 15th - the final points-scoring position - by lap six.

On the final tour he passed Daniel Syahmi and also benefitted from Peerapong Boonlert's crash to end up 13th at the chequered flag. It was Sethu’s best result of the season and came fittingly at his home turf.

Sethu teammate Anish Shetty was also on course for a points finish until he fell off the bike on lap 7. He was forced to retire from the race, but will get another chance to seek redemption in Race 2 tomorrow.

Hada put on an impressive show for Honda Racing India team in the flagship Supersport 600cc category, catapulting from sixth to first at the start of Race 1.

He was then embroiled in a two-horse race with former MotoGP rider Anthony West; the duo trading places several times during the remainder of the race.

But on lap 11 the experience of West proved too much for Hada, the Australian taking the lead into turn 3 and then pulling away from the rest of the field to take the win.

Hada, meanwhile, also slipped behind Zaqhwan Zaidi but did enough to hold on to the final spot of the podium - the first for Honda Racing India team in the category.