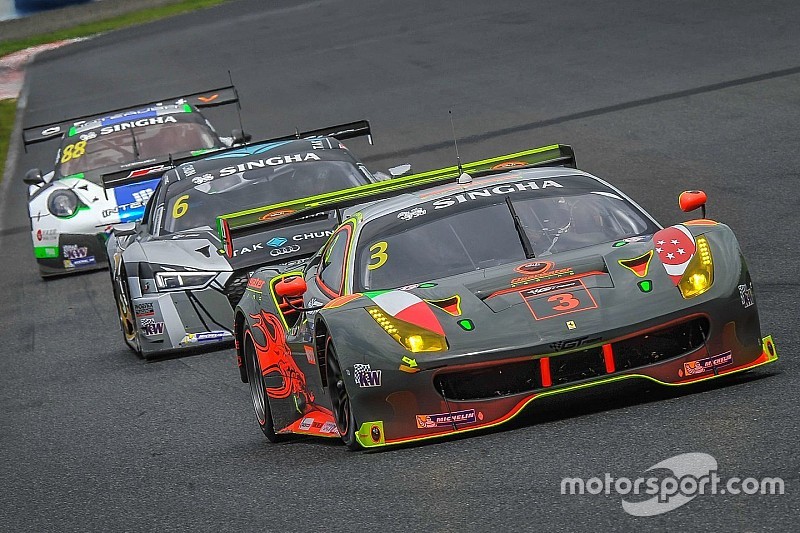 Take a look back at the 2016 GT Asia Series season by the numbers!

The 2016 GT Asia Series was the closest on record, with any number of challengers right through the field capable of standing on top of the championship podium...

0. The number of retirements suffered by the #5 Audi R8 LMS GT3 of Marchy Lee and Shaun Thong on their way to second in the 2016 championship.

0.023 The margin by which Alex Yoong claimed pole at Shanghai in October over Davide Rizzo, Yoong’s margin over fellow Audi driver Franky Cheng at Shanghai in August, just 25 one thousandths..!

0.052 Anthony Liu’s margin of victory over Vutthikorn Inthrapuvsak during race one at Shanghai in August, the margin over third.. just 0.221 seconds!

1. The number everyone was looking for in 2016, but the number that was taken by Lamborghini Squadra Corse’s Edoardo Liberati and Andrea Amici.

3. The most number of wins recorded by a single team in the 2016 season, the #8 Bentley of Keita Sawa and Jonathan Venter.

4. The number of marques who claimed victory in the 2016 GT Asia Series; Audi (3x wins), Bentley (4x wins), Ferrari (3x wins) and Lamborghini (2x wins), although that number becomes 5 when you consider Ferrari won with both the 458 Italia and the new 488 GT3.

6. The number of times the #37 Ferrari have been on the podium in six starts at Korea International Circuit, three of those were wins!

7. A Series high number of podium finishes from 12 starts for the FFF Racing Team by ACM pairing of Edoardo Liberati and Andrea Amici.

9. The number of wins Japanese veteran Keita Sawa has taken in GT Asia across the last three seasons - four of those coming alongside 2014 champion Mok Weng Sun in the Clearwater Racing Ferrari.

11. The number of cars that qualified within a second of the pole man - Alex Yoong - ahead of round nine of the season at Shanghai, those 11 cars included entries from Audi, Bentley, Mercedes-AMG, Porsche and Ferrari (both 488 and 458) - across the full Formula One length layout with a two minute plus lap, that was impressive in anyone’s language.

12. The number of rounds in the 2016 season, starting from South Korea in May, and running through till Shanghai in October.

17. Different nationalities contested the 2016 GT Asia Series, with drivers from all corners of the world, from Europe, India, Australia, the USA and across Asia.

31. The number of starts Alex Yoong made ahead of his maiden win in the GT Asia Series.

41.085 The greatest margin of victory during a round of the 2016 season, going to TP12 Racing’s Piti Bhirombhakdi on his way to victory in the opening race at Fuji.

1748.85 The number of kilometres across which the 2016 GT Asia Series was contested.