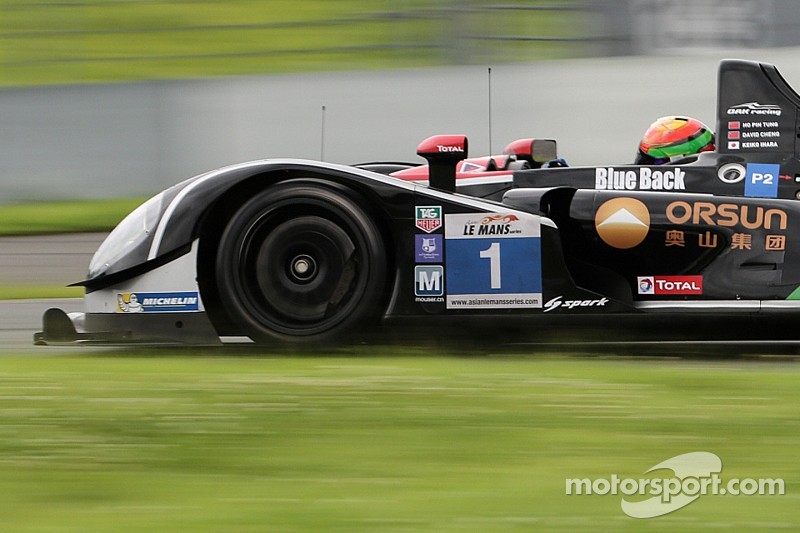 Oak Racing delivered and have taken home valuable points for the team and drivers.

The Asian trio of Ho-Pin Tung, David Cheng and Keiko Ihara have taken the chequered flag at the Fuji Speedway in Japan for the second round of the Asian Le Mans Series. The race was a bit tougher than expected for the drivers of the #1 OAK Racing Team Total Morgan-Judd LM P2, but, supported by Total, TYREPLUS and Orsun, the team delivered and have taken home valuable points for the team and drivers.

Saturday’s Qualifying session was very close, with Ho-Pin Tung narrowly missing out on pole. With his time of 1:34.505, he put the #1 Morgan-Judd LM P2, developed and built by Onroak Automotive, in second place on the grid. He was beaten by Richard Bradley in the #27 Eurasia Motorsport Oreca-Nissan, who set a time of 1:34.495, only 0.01 seconds faster, which equals to a gap of a mere 48 cm on track. With the cars so close in performance, the upcoming battle was looking promising.

When I went into that corner, suddenly, I lost the feeling in the steering wheel and I lost control of the car.

Under a sunny sky, Japanese driver Keiko Ihara got the team off to a good start in Fuji, taking the lead from the #27 Eurasia Oreca-Nissan that stalled on the grid and lost two laps. She delivered consistent laps of around 1:38, holding onto a good first place.

The battle was far from over though, as Richard Bradley managed to quickly catch up on lost time, and, 40 minutes into the race, was back up to second place. Keiko may have had a chance to fight for position, but she had to return to the pits to fix a broken hood and front splitter after she lost control and went straight into the tyres. After quick repairs, she rejoined two laps down from their rivals.

One hour in, and Keiko Ihara handed over to Chinaman David Cheng, whose goal was to bring the car back up the field. Halfway through his stint, David Cheng managed to overtake the #27 for the first time, bringing their gap down to one lap. During his stint, David managed to set lap times that were consistently a second or two faster than Pu Jin’s and slowly continued to close the gap.

After nearly two hours, David Cheng handed the #1 OAK Racing Team Total Morgan-Judd LM P2 over to Chinese Ho-Pin Tung for the final stint. Harshtone was in the #27 and was still in the lead, but with lap times almost 10 seconds slower than Ho-Pin Tung’s, it was only a matter of time before Ho-Pin caught up.

Fifteen minutes into his stint, Ho-Pin Tung took the lead, even with the tyres suffering from understeer. Once he’d overtaken the #27, he kept up his strong pace, building a good lead on their rivals who suffered a 40 second stop&go penalty.

The final half hour of the race was tense as, with Bradley back in the #27, the gap closed up once more. Bradley worked hard to catch up, but Ho-Pin managed to keep calm and steady and bring the car home in first place.

Keiko Ihara: “I had a good pace, and would have kept it but I had a trouble at the end of the stint. When I went into that corner, suddenly, I lost the feeling in the steering wheel and I lost control of the car. I was braking very hard, but couldn’t stop it and finally crashed. It was unlucky, but I was also lucky because the gear was stuck, and I pushed a button to go into emergency mode, and the gear managed to reconnect, so that I could get back to the pits. The team worked very hard and I could carry on the race. I was very happy to win, and with thanks to my team mates as well who did a very good job!”

David Cheng: “As it was at the 43 minute mark, we couldn’t do a driver change when Keiko came to the pits, but I think it goes to show what endurance racing is and goes to show how well this OAK Racing Team Total functions. We got the wing changed really fast and didn’t lose too much action time. A few laps later, I went in the car. I knew that the Eurasia car was in the lead, so I knew I had to push.

I had a really fun stint, and eventually caught up to the GT field and passed them quite quickly, and worked up to Pu Jun Jin. All I could do was to try my best. He was going at quite a good pace, so it was difficult to pass, but once I saw the opportunity, I got close enough and made a move on the front straight. Then I made a bit of a gap before I passed to Ho-Pin, and let him take it from there. “

Ho-Pin Tung: “Because of Keiko’s trouble with the car, we had to change our strategy because the tyres were damaged as well in that crash. We had to change tyres after Keiko’s stint, so the tyres had to be triple stinted; we did three quarters of the race with one set of tyres, as David used the same set in his stint as well.

For me, it was basically to try and bring the car home at a consistent pace, which I managed to do I think. The car wasn’t in a perfect state to drive due to the accident and having to manage on one set of tyres, but I think the team made a good turnaround and shows that you should never give up.”