Algarve Pro Racing on pole for the 4 Hours of Fuji 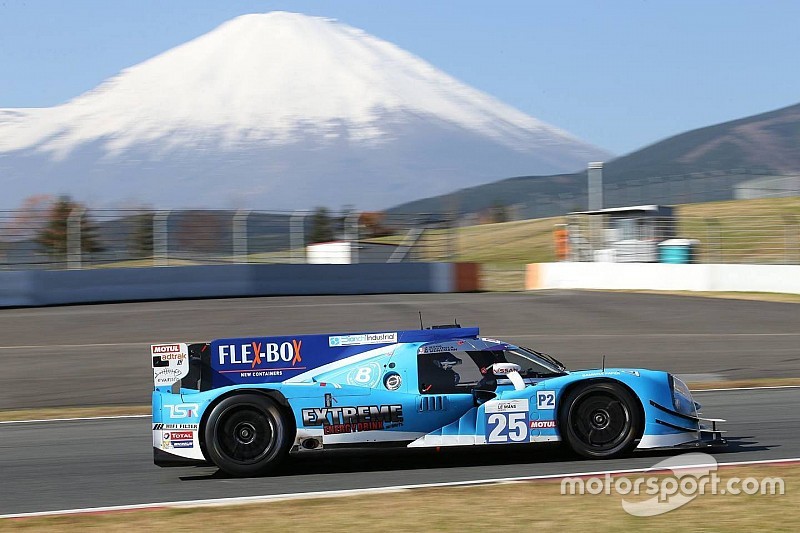 The #25 Algarve Pro Racing Ligier JSP2 Nissan will be starting on pole at the foot of Mount Fuji on Sunday for the 2nd round of the Asian Le Mans Series. Andrea Pizzitola’s lap time of 1:32.646 placed the team at the head of the 27 strong field. The #26 Tockwith Motorsports Ligier JSP3 took the LMP3 class pole, and the #37 Team BBT Ferrari 488 GT3 will be on pole in the GT class.

The results in both free practice sessions were quite varied and predict a close race ahead, with Free Practice 1 seeing the top 4 within 0.262 seconds! The #35 Jackie Chan DC Racing Oreca 03R Nissan topped the first two-hour session on Friday afternoon with a best lap of 1:34.486 and the #25 Algarve Pro Racing Ligier JSP2 Nissan topped Free Practice 2 with a lap of 1:33.523.

Team AAI’s new #91 BMW M6 GT3 (that replaces the McLaren 650 they raced with in Zhuhai) was the fastest GT car in both sessions, whose quickest lap was 1:37.744 on Saturday morning. The Ferraris are also strong here, with the DH Racing, Spirit of Race and Team BBT Ferraris all setting some of the quickest times in the Free Practice sessions.

On Saturday afternoon, in bright but fresh conditions with the clouds coming in, the cars took to the track for qualifying, with Andrea Pizzitola claiming the second consecutive pole for the #25 Algarve Pro Racing Ligier JSP2 Nissan in the Asian LMS with a time of 1:32.646. Just behind him was Gustavo Menezes in the #35 Jackie Chan DC Racing Oreca 03R Nissan with his time of 1:32.916. The #8 Race Performance Oreca 03R Judd was 3rd fastest thanks to Struan Moore’s lap time of 1:33.089. Algarve Pro Racing’s second LMP2 entry, the #24, saw Jonathan Hirschi set a time of 1:33.771.

The LMP3 pole went to the #26 Tockwith Motorsports Ligier, thanks to the time of 1:36.054 set by Nigel Moore. Charlie Robertson was very close to claiming pole with his time of 1:36.115 in the #67 PRT Racing Ginetta LMP3. Current class points leaders, the #1 Jackie Chan DC Racing Ligier JSP3, were third in class after James Winslow set a time of 1:36.523.

The #48 PS Racing ADESS 03, representing the third type of LMP3 chassis in the Asian LMS, has got off to a slow start this weekend, but Louis Prette managed to set a time of 1:40.439.

The second qualifying session, this one for the GT and GTCup cars, saw Ferraris claim the top three slots, with Alessandro Pier Guidi going quickest in the #37 Team BBT Ferrari 488 GT3 with his lap time of 1:37.083. The #5 DH Racing Ferrari 488 GT3 was second thanks to Matthieu Vaxviere’s lap of 1:37.228 and the third best GT time was set by Marco Cioci in the #38 Spirit of Race Ferrari 488 GT3 with a time of 1:37.243. Things will be close in the GT class with the top 9 setting times within 1 second of the class pole sitter. The GTCup entry, the #96 TKS Porsche 911 GT3 Cup set a lap time of 1:43.974 with Shinyo Sano at the wheel. This team also sees the Asian Le Mans Series' first handicapped driver with Takuma Aoki sharing the wheel of the #96 with Shinyo Sano and Shigeto Nagashima.

With the good weather set to continue, tomorrow’s 4-Hour race is set to be a closely fought one! See you at 12:15 local time for the start of the race! You can follow it on live streaming with on-site commentary from DSC's Graham Goodwin, just click on the link below.

#25 Algarve Pro Racing Ligier JSP2 Nissan, Andrea Pizzitola: “I love this track. It’s really nice with this car. Fast and slow corners, a bit of everything. It’s also special for me because this time last year I was here testing the GT500 and that was an important test for my career. I feel happy to be back on this track and I’m happy for the result for the team. It was a nice quali. It was a bit stressful, I was second for the whole quali and then on the last lap, I did a good lap with no traffic, which is important. I’m happy.”

#26 Tockwith Motorsports Ligier JSP3, Nigel Moore: “It wasn’t bad. We held back a bit before we went out. Went out and were in the top pretty much from the start. The Ginetta got close at one point but I put it in its place. We got pole for the first time at a circuit and I think the whole team is enjoying it, so we’re happy. Really enjoying it. It’s quite different, and the characteristics of the circuit are quite good. It’s going to be a close race, with the P2s as well at the start of the race. I’m looking forward to it.”

#37 Team BBT Ferrari 488 GT3, Alessandro Pier Guidi: “It was a really good quali. To be honest, I was surprised with the lap time, but the track looks quick this weekend. The team did a very good job. This pole is for them. We had bad luck last race in Zhuhai, so I think we deserve something good. To be on pole is always nice. But pole is only the first part of the race. Tomorrow we have to push to be back here at the end of the race.”

#96 TKS Porsche 911 GT3Cup, Shinyo Sano: “This is my home circuit, so I could relax and enjoy myself. We’re also the only team in the GTCup class, so it was fun and I’m enjoying the weekend.”