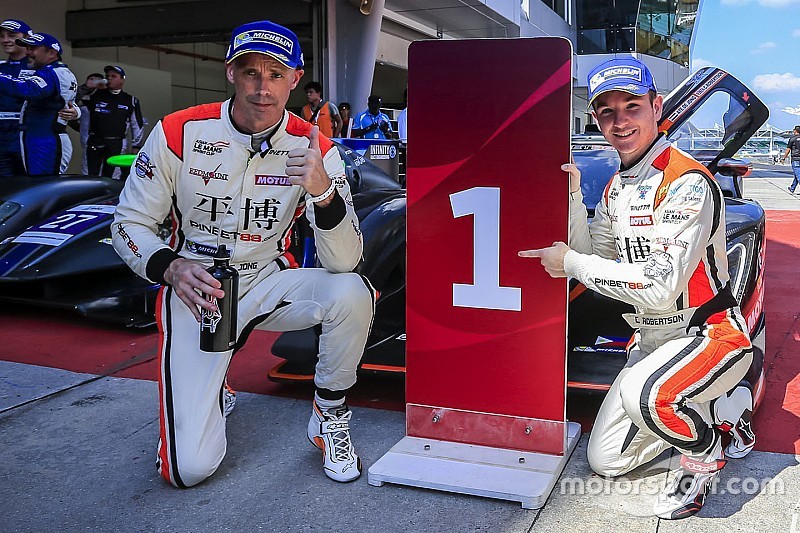 Charlie Robertson managed to fend off his rivals at Sepang and created an impressive gap of over 45 seconds to the car in second place.

Ate de Jong and Charlie Robertson have won Race 4 of the Asian Le Mans Sprint Cup in the #67 PRT Racing Ginetta LMP3, finishing ahead of the #27 Nexus Infinity ADESS 03 and the #48 PS Racing ADESS 03. The GTCup class was won by the #77 Team NZ Porsche GT3 Cup for the second time this weekend, ahead of the #28 Team Lotus HK Lotus Evora GTC.

Leading from start to finish, the #67 PRT Racing Ginetta LMP3 took a great start from 3rd on the grid with Charlie Robertson at the wheel, who made the most of the #1 DC Racing Ligier losing a tyre on the warm up lap, and managed to overtake the #94 Wineurasia Ligier JSP3 in one of the first corners. Robertson managed to fend off his rivals and created an impressive gap of over 45 seconds to the car in second place by the time the pit window opened, as well as setting the quickest race lap of 2:01.860.

Behind him, there was a great battle for second place between Aidan Read in the #94 WINEURASIA Ligier JSP3 and Garnet Patterson in the #27 Nexus Infinity ADESS 03, that was cut short when the #94 stopped on track due to a broken driveshaft. Patterson in the #27 took advantage of that and kept a hold of 2nd place, which he then handed over to Adrian D’Silva to bring home for their podium finish, a great result after having missed Race 3 due to gearbox issues and only receiving a replacement Sunday morning.

Newcomers to the series, Ringo Chong and Alan Yeo in the #48 PS Racing ADESS 03, which had to miss out on both free practice sessions due to the car arriving late on Friday, made it to third place and are very happy with their podium. The #1 DC Racing Ligier came 4th in LMP3, after having received a 1-minute stop&go penalty for taking a short-cut back to the pits when losing a wheel. Jamie Winslow had been making steady progress back up the field, and was the quickest car in the 2nd half of the race, but there wasn’t enough time left to fight for a podium place.

In the GTCup class, the battle was between the #77 Team NZ Porsche GT3 Cup of John Curran and Graeme Dowsett, and the #28 Team Lotus HK Lotus Evora GTC with Anthony Chan and Dominic Ang sharing the wheel. The #77 Porsche GT3 Cup had to start from the back of the grid despite getting pole in qualifying, but managed to take a good start and kept ahead of the #28 Lotus Evora GTC for the rest of the race.

The CN entry, the #68 PS Racing Ligier JS 53 started off strongly with Iori Kimura at the wheel, but started suffering from gearbox and electrical issues, and unfortunately finished the race in the pits.

Following the results this weekend, this means that Ate de Jong and Charlie Robertson are now leading the driver’s points with 73 points each, with Jamie Winslow only 9 points behind. Their win today also boosts their team to the top of the leader board for the teams.

In the GTCup class, Anthony Chan and Dominic Ang are still holding onto their lead in the points with 81, but thanks to their two wins and one pole position, Graeme Dowsett and John Curran are now at 75 points and closing in fast. This also means that the #28 Team Lotus HK is leading the GTCup teams points.

Charlie Robertson: “I did exactly what I wanted to do. I knew I had to get a good start. Luck did play a part, with James having an issue on the rolling lap, but you know, you get bad luck as well as good luck so you’ve got to take advantage when you do get the luck. I managed to get Aiden into the first corner, and I knew from then on I just had to push. I was hoping to get a 10 second gap before the pitstop, before handing over to Ate. We did that, but after the Ligier (#94 WINEURAISIA) had an issue, which was good for us, we managed to have a comfortable lead and when I handed it to Ate, he just extended it. I said yesterday that we were hoping to move up to second, and to hopefully trying to win soon, and to get a win the very next day is amazing. PRT Racing did a fantastic job, Ate drove excellently, and the Ginetta was amazing.”

Ate de Jong: “The win came sooner than expected. I was thinking it would come in the endurance series, maybe in Zhuhai or in Buriram, but we got a bit of luck already, and that’s motorsports. It was quite easy for me, I could go on safe pilot mode. Charlie had already made a gap of 45 seconds, and I heard that I was 2-3 seconds faster, so I just extended the lead and put it in safe pilot to bring it home, and that’s what we did. I’m ecstatic. Charlie’s amazing and the Ginetta car is very fast. I think we had the fastest lap again. All my thanks to Ginetta and John O’Hara”

Garnet Patterson: “It’s been a pretty whirlwind weekend with yesterday, in qualifying, the gearbox went bang. It was a bit of a hard night trying to put something together for today. We luckily got a new gearbox at 11:30 today, which was quite a quick turnaround. The guys at Nexus Infinity did an awesome job to put the car back together for the start of the race at 2. I got a really good start, got around the outside of Aidan for P2. Pushed as hard as we could, but Aidan had a bit more speed and got past us, then unfortunately had a problem. It was a really good race, Adrian did a good job keeping it in 2nd place for the rest of the race with the car we had. We’re getting faster and faster. Big thanks to Adrian and everyone at Nexus for being there this weekend and getting us out for the 2nd race.”

Adrian D’Silva: “Like Garnet said, it’s been an eventful weekend, with all the gearbox problems. We didn’t have time to look at some issues. But we were lucky. The boys did a good job. They’ve worked tirelessly for two nights, both til 3am. We got the gearbox back in by about 1230, jumped in the car, which had a few issues, but Garnet did a good job putting us in 2nd, and I just had to hold on. No way were we going to catch up to PRT. My job was pretty simple, just hang on to second. There was a bit of traffic, but otherwise it was an excellent race. I’m a bit surprised to be up here in 2nd.

Ringo Chong: “It’s really surprising to be here. I didn’t think I would even start the race because our car was so late getting here. We only got it on Friday evening. Then we fixed the seat. It’s my first time in an LMP car, I’ve never driven one before, it’s a bit different from the normal GT cars that I drive. The first thing I did was the 15-minute qualifying session. Heading out to the pitlane, I couldn’t find the pit limiter! It was smooth sailing though, just learning the car. It’s the first time for us, jumping from one car to another was difficult, but it’s been lovely watching the others drive and learning from them. I think our heart is with the ‘proper’ racing cars now.”

Alan Yeo: “It was really hot. It’s our first time, and we didn’t have any practice time as our car arrived late. So we didn’t have the experience, but we really enjoyed it and it’s good to learn from the professionals as well, for how to go faster in the future. I’d like to thank PS Racing and the whole team to put it all together for us. It’s really good to be out here.”

John Curran: “I think everything went to plan. It’s been a fantastic weekend all round. Graeme and I have set personal bests this weekend. The car feels great. The mechanics and engineering provided by Will Bamber have been fantastic. It’s been a great weekend and looking forward to next race in early September.”

Graeme Dowsett: “It was a good race for us. Everything went as planned. Unlucky that the Lotus guys only had one car on the grid, but they kept that going pretty much at its pace, which is a credit to them. I’d like to thank Asian Le Mans’ organisers for the race series, it’s excellent fun and a job really well done. And to our sponsors too. I’m looking forward to the next race.”