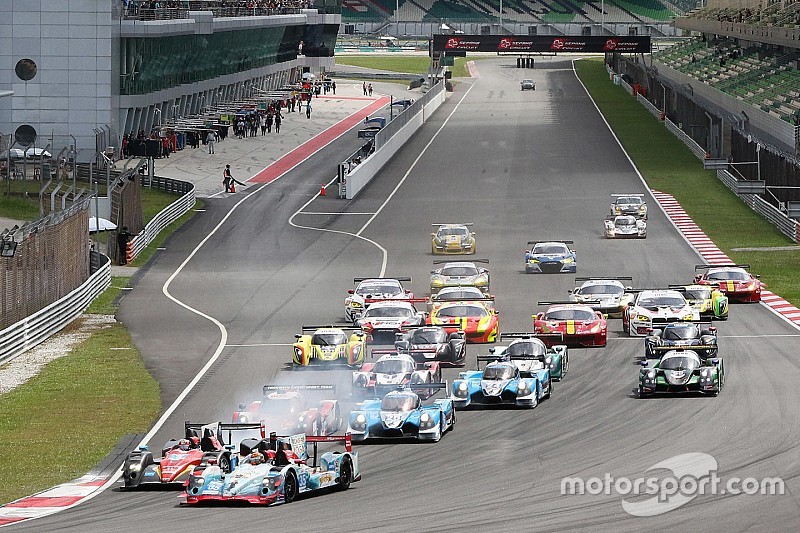 Le Mans is the ultimate challenge, one that all teams and drivers want to win

This week marks a significant milestone for the Asian Le Mans Series – 11 cars from 8 teams that have competed in the series will take part in the premier endurance race, the 24 Hours of Le Mans.

The success of the ACO’s Asian Series as a stepping stone to the premier event is clear with this year seeing the biggest representation of teams competing in the Asian Le Mans Series ever seen, and the Series expects next year to be even bigger.

On the grid this weekend will be all three Championship winners from the 2016/17 season, Algarve Pro Racing (LMP2 winner), Tockwith Motorsports (LMP3 winner) and DH Racing (GT winner). Each received an invitation to take part in the 24 Hours of Le Mans as a result of winning their class in the Asian Le Mans Series.

Cyrille Taesch-Wahlen, Asian Le Mans Series Managing Director: "To see a record number of Asian Le Mans Series teams here this weekend is really positive, and we expect the number to be higher next year. The Motorsport industry in Asia is booming and it is our intention to do whatever we can to help drive this growth even further.

We are excited to be able to offer our teams the opportunity to make the step up from Asia to the World Championship. As the reference endurance racing series for prototypes and GT classes in Asia, we offer the only direct pathway into a World Championship and into the world’s most significant endurance race – the 24 Hours of Le Mans.

In addition to the 11 entries taking part in the main race, there are also two Asian Le Mans Series teams competing in the Road to Le Mans support race this weekend."

At the top of this pyramid is the FIA World Endurance Championship, which, along with the 24 Hours of Le Mans represents the summit of excellence. The race is the ultimate challenge, one that all teams and drivers want to win.

Launched in 2013 by the Automobile Club de l’Ouest (ACO), the Asian Le Mans Series is the embodiment of Le Mans endurance racing for the Asian continent. Initially operated by a third party company, the ACO took over management, organization and promotion of the Series at the end of
2014. Since then the series has gone from strength to strength.

The 2016/17 season built on the confidence that was developed the previous season, and saw the
format evolve, with races increasing to four hours in duration, and the Series visiting four different circuits in Asia, including a return to China.

Competing in the 24 Hours of Le Mans

Samantha Cox: "Competing in the Asian Le Mans Series and gaining an automatic entry by winning the 2016/2017 LMP2 Championship have given the team and drivers confidence for the 24 Hours of Le Mans.

We enjoyed a really strong campaign in the Asian Le Mans Series this year, and this was pivotal in helping us prepare for the 24 Hours of Le Mans. The team put in a lot of work, a lot of effort and everyone played a role in bringing us the success.

The Asian series is getting bigger and stronger all of the time, and we had a great season with many podium positions with both cars. Out Championship success paved the way for us to compete at Le Mans again with the guaranteed entry, and this made it so much easier for us to plan and execute our programme."

Mark Goddard: "Eurasia has competed in Asian Le Mans Series from the first event back in 2013. We felt that it was a great way to prepare the team for racing in the Le Mans 24 Hours, and I believe our record in European Le Mans Series, we finished 5th overall in 2016, demonstrates that Asian Le Mans Series really helps develop world class teams. Last year was our first Le Mans and not only did we finish but we were 9th overall, 5th in the LMP2 class and first non-WEC team home.

As the Asian Le Mans Series grows we will see more Asian based teams compete in the 24H and the WEC. This year we are running a Ligier at Le Mans and we are happy to be running a car from a manufacturer which fully supports the Asian market with on-site spares and technical back up. Our aim is to finish and to once again reward the faith ACO has put into Asian Le Mans Series teams."

Simon Moore: "They have made the step up to LMP2 this year and in addition to the 24 Hours of Le Mans, are competing in the full European Le Mans Series.

We had a thoroughly enjoyable season in the Asian Le Mans Series and couldn’t have been happier, as we clinched the title with our drivers Nigel Moore and Phil Hanson in our Ligier JS P3. This triumph was the catalyst that provided us with our official entry to Le Mans this week, and it’s our intention to defend our title in the coming Asian series.

We are really looking forward to meeting the many friends we made during our last adventure in Asia. All being well we will there."

Miro Konôpka: "I'm really happy to race in Asia. I love the tracks there, and there is a very welcome friendly atmosphere every time we come there.

Our success in Asian Le Mans Series helped us to start at 24h Le Mans. I will remember it forever."

Weng Sun Mok: "The Asian Le Mans Series is THE reason that I'm at Le Mans again, and now a full time competitor in the WEC. It's the reason why Clearwater Racing are entering two cars at the 24-Hours this year! Without the experience of participating in the very well run and highly competitive series that the Asian Le Mans Series is, I wouldn't have had the opportunity, or impetus, to enter Le Mans, let alone the WEC.

I firmly believe that the Asian Le Mans Series is a crucial stepping stone for both Asian teams and drivers who one day wish to fulfil that cherished dream of competing at the world's premiere endurance racing event."

Amato Ferrari: "From the very beginning we believed in the Asian Le Mans Series and in its high potential as shown by our numerous attendances and many investments.

Precisely thanks to our participations we have developed relationships and partnerships that allow us to be in the FIA WEC with an additional car lined up for Clearwater, and in the 24 Hours of Le Mans with two cars for Clearwater and another one for DH Racing. Soon we will announce the official plans looking at 2017/2018 championship.

Competing in the Road to Le Mans

William Lok: "WIN Motorsport is delighted to exclusively fly the flag for Hong Kong amongst the prestigious international Road to Le Mans field.

WIN Motorsports arrives in La Sarthe carrying the momentum of two overall victories in the 2017 Asian Le Mans Sprint Cup opening rounds on our racing debut in Malaysia recently. The Road to Le Mans double-header is an excellent ACO initiative. It represents an ideal showcase for the leading Asian Le Mans Series teams such as WIN Motorsport to compete in Europe on the undercard of the world’s greatest endurance race. WIN Motorsport intends to take this opportunity to make Hong Kong – and Asia – proud."

Shinyo Sano: "We participated in Asian Le Mans Series GT-Cup class for the first time last year. This year we entered the Asian Le Mans Sprint Cup which gave us this great opportunity to participate in Road to Le Mans in LMP3 class, this is new challenge for us.

We will try to do our best, and are hoping we can get an excellent result in the race. I’m excited to fight on the La Sarthe circuit."