The most exciting season of endurance racing ever seen in Asia is all revved up and ready to go after a glamorous launch party in Hong Kong.

The series will comprise six races – in China, South Korea, Japan and Indonesia – between May and December, with organisers confident of having at least 18-24 cars on the grid at each event. Tyre manufacturer Michelin and petroleum giant Total have confirmed their partnership status with the Asian LMS. 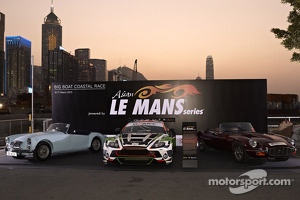 Pierre Fillon, President of the Automobile Club de l'Ouest (ACO), organisers of the Le Mans 24 Hours, hailed the new series as a huge development for motorsport in the region.

“On the day of the official launch of the Asian Le Mans Series I’m delighted to see that this Asian championship, which we’ve all been working on for a long time, has finally come to fruition.” he said.

“Like all the continental series run under the Le Mans label in the spirit that has driven the Le Mans 24 Hours for the last 90 years, the Asian Le Mans Series will enable manufacturers to showcase the reliability of their cars, promote their image and also demonstrate the validity of their new technologies in the crucial Asian market in a sporting and competitive spirit guaranteed by the values of the Automobile Club de l’Ouest.

“The ACO is particularly proud to have contributed to the development of motor sport on the Asian continent by enabling teams, drivers and their partners to take part in endurance events, whose values are those which, since 1923, have underpinned the success of the Le Mans 24 Hours.”

The Asian LMS is a significant step in the ACO’s quest to take the Le Mans brand to all corners of the world, a process that began 15 years ago with races in the USA followed by a European series that started in 2004.

Asia’s first Le Mans-style race took place in Japan in 1999 but this year will mark the first full season of endurance racing in the region under the Le Mans banner.

The Asian LMS is being organised by the Asian Endurance Operating Co Ltd (AEOCL). “This is a historic moment for Asian motorsport and is the culmination of a lot of hard work by the many different partners and stakeholders involved,” said AEOCL Managing Director Mark Thomas.

“We are grateful to the respective national associations and circuits that will host the races as well as the manufacturers, teams and commercial partners who have shown such strong support. We are confident we can cement the Asian Le Mans Series as one of the pre-eminent motorsports properties in Asia.”

Guests at the launch included Chinese driver Ho-Ping Tung, who announced he would be driving for French team OAK Racing in the series.

"Being a Chinese driver I am very proud to have the opportunity to defend my country's colours in this new series in Asia that has been instigated by the ACO,” said the Dutch-born star, who will be driving a Morgan LM P2.

“Competing in the Asia pendant of the prestigious Le Mans Series thrills me and this should contribute a great deal to the development of endurance racing in Asia.”

Tung’s extensive single-seater CV includes reserve and test driver roles with three F1 teams but this will be his first experience of driving a sports prototype.

A significant number of teams and car manufacturers have already confirmed their participation in the series, with registration remaining open until 20 March.

Official testing will take place at Zhuhai International Circuit in China on 29-30 April. The series opens with three races in China – at Zhuhai (5 May), Shanghai (26 May) and Ordos (7 July), followed by Inje in South Korea (4 August), Fuji in Japan (22 September) and Sentul in Indonesia (8 December). The races are open to several classifications of car, including both prototypes and GT models.

Fox Sports Asia (formerly ESPN Sports) and Eurosport Asia-Pacific are TV partners of the series and deals with local broadcasters such as J Sports in Japan and CCTV in China have been agreed as well. RacerLink, the online, multi-channel, content delivery platform, has been unveiled as the social media partner of the Asian LMS while Events Production Marketing is on board as production and broadcast consultant.

The ACO would like to wish the 2013 Asian Le Mans Series the best of luck!