Grand finale in Malaysia decided the results of the first season 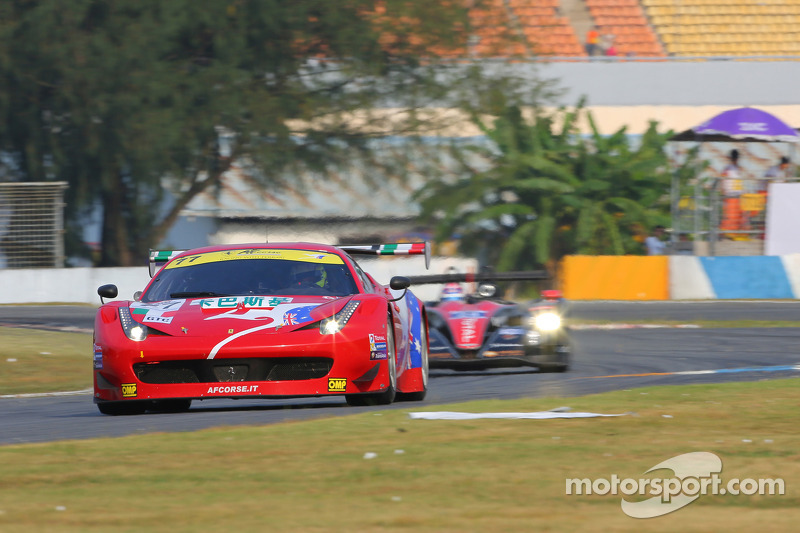 After three previous rounds, and a very hard-fought set of free practice sessions and qualifying, 3 Hours of Sepang took place yesterday on a hot and dry afternoon at Sepang International Circuit in Malaysia, and lived up to the billing as the grand finale for the 2013 Asian Le Mans Series

LM P2 - Only 0.348 seconds separated the LM P2 teams in qualifying, and it was No. 27 Craft Racing Oreca-Nissan who were able to get off to a good initial lead with Richard Bradley setting the pace, whilst James Winslow (No. 18 KCMG Morgan-Nissan) and David Cheng (No.24 OAK Racing Team Total Morgan-Judd) were locked in a battle behind. Winslow was able to get ahead and KCMG's second driver Tsugio Matsuda kept the lead ahead of Ho-Pin Tung (OAK) after their driver changes.

At the halfway mark KCMG and OAK had manage stretch away from No. 27 Craft, and were separated by just 5 seconds. With half and hour to go KCMG were still leading, but would have to make on more pit-stop. The re-fuel and tyre change for KCMG gave OAK the opportunity to get ahead and Ho-Pin Tung did not let the chance slip.

Tung got ahead and the 30 second lead proved to be insurmountable, giving OAK Racing Team Total their second win of the season, the LM P2 Team Championship + invitation to 2014 24 Hours of Le Mans, and David Cheng the Drivers Championship. In second were KCMG, and No. 27 Craft Racing driven by Richard Bradley, Dan Polley, and Pu Jun Jin battled well in the team's first LM P2 outing to finish in third. Click to see

GTE - No. 70 Team Taisan Ken Endless Ferrari 458 GT faced competition from No. 35 AAI-RSTRADA Porsche 997 RSR in the GTE class, as Taisan went for 4-from-4 in 2013. Both had evenly matched times in the free practice sessions, and Marco Seefried was able to get No. 35 AAI-RSTRADA off to a good start building up a lead ahead of Taisan in the first hour.

However No. 35 AAI-RSTRADA then suffered a technical problem and had to return to the pits for a considerable time. This gave Taisan the chance to stretch out a lead and the driving team of Naoki Yokomizo, Akira Iida, and Shogo Mitsuyama were able to do this, and hold off No. 35 AAI-RSTRADA's fight-back by drivers Ryohei Sakaguchi and Morris Chen, all the way to the finish, Taisan taking the win.

GTC - Craft Racing's No. 007 and No. 009 Aston Martin Vantages got off to a very good start with Stefan Muecke (007) and Darryl O'Young (009) building a lead at the front of the pack. Behind them GTC contenders No. 91 AAI-RSTRADA BMW Z4, No. 37 BBT Lamborghini Gallardo, and No. 33 Clearwater Racing Ferrari 458 GT3 were tussling for position.

A momentum shift came at the half-way point with Andrea Bertolini in for Steve Wyatt in No. 77 AF Corse Ferrari 458 GT3, and Toni Vilander in for Weng Sun Mok for Clearwater. Bertolini and Vilander battled it out toughly (and fairly), with Bertolini also contesting with one of the LM P2 cars.

This enabled Vilander to stay on Bertolini's tail and was eventually able to pass. Vilander was able to stay ahead of Michele Rugolo (AF Corse) who chased Clearwater Racing's until the end, and Clearwater took the win.

However Low and Primemantle Aylezo's third driver Dilantha Malagamuwa were able to hold off the challenge from Mike Racing's Michael Chua Khian Keng, Rick Cheang Wan Chin, and Joseph Chua Thian Song, to take the win for Primemantle Aylezo in GTC Am. Gama Racing and drivers Han Lin, Hanss Lin, and Michael Huang were unfortunately unable to finish the race.