John O'Hara talks about the success at 3 Hours of Inje and KCMG's view on Asian Le Mans Series.

This week's interview is with John O'Hara. A former Asian F3 Driver of the Year and Formula Ireland Champion John is now based in the Philippines and is KC Motorgroup Ltd (KCMG)'s Deputy Managing Director and Asian Le Mans Series Manager. In addition he is FMCS & LSTA Team Manager and oversees & advises for the Le Mans 24 hr project. John tells us about success at 3 Hours of Inje and KCMG's view on Asian Le Mans Series.

KCMG achieved a historic victory in Inje at the inaugural race of the inaugural Asian Le Mans Series, what do you think were the key components behind your success? "A strong driver line up, reliability, good strategy and clean pit-stops. 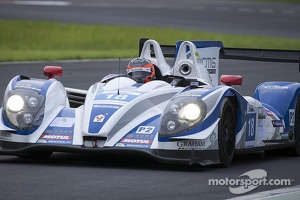 In Inje we had the privilege of working with 3 very quick drivers in Akash, Gary and James and although they had no LMP2 experience, we knew we had a quick car and were in with a good shot of victory.

They have all proved themselves in various disciplines in recent seasons. Likewise our crew, led in Le Mans by Jonathan Bartlett, know the car inside out at this stage and having the benefit of working as a team during Silverstone WEC and Le Mans performed faultlessly. Lastly our engineer, Andrew Winsall who was drafted in at the 11th hour took little time getting to grips with the car and developed a flawless strategy during the weekend."

What are KCMG’s objectives for Asian Le Mans Series? "Becoming the first Chinese team to enter the historic Le Mans 24 hr in June, Paul Ip and Lorens Lin have displayed that KCMG want to do more than make up the numbers. By briefly leading the race we proved that we have a very competitive package and ultimately the goal is to win.

It was extremely satisfying to make history in Inje by becoming the first team to take victory in an Asian Le Mans Series event and our aim is to continue that form in Fuji. It’s very nice to be part of the development of Le Mans type endurance racing in Asia, we are very confident that the series has a very bright future and KCMG want to be a part of it."