OAK Racing rounds off its incredible season victory and championships

The OAK Racing Team Total squad won the first titles in the history of the Asian Le Mans Series by two points.

To win the Sepang 3 Hours and the Asian Le Mans Series titles, the OAK Racing Team Total had no choice other than victory by Ho-Pin Tung and David Cheng at the wheel of their Morgan-Judd LM P2. Thanks to a daring strategy and an impeccable display by the team allied to the performance of the drivers, these aims were achieved. The OAK Racing Team Total squad won the first titles in the history of the Asian Le Mans Series by two points, and David Cheng the drivers’: a great reward for the Chinese youngster who made stunning progress throughout the season.

At the end of a thrilling year, the outcome of the battle for the first Asian Le Mans Series titles was decided in the final round between two Morgan LM P2s from the Onroak Automotive workshops: the Morgan-Nissan LM P2 entered by KCMG the team from Hong Kong and the OAK Racing Team Total’s Morgan-Judd LM P2. To add a dash of spice to the last race of the year, Craft Racing entered a third LM P2, an Oreca -Nissan. The OAK Racing Team Total arrived at Sepang four points behind KCMG, and it had to make the right choices to try and enrich the results of a season already crowned by a double in the Le Mans 24 Hours and a double in the FIA World Endurance Championship in both the drivers’ and teams’ championships in the LM P2 category.

Among the drivers, all from Asia, who took part in the Asian Le Mans Series with OAK Racing the Chinese pairing of David Cheng and Ho- Pin Tung, winners of the Zhuhai 3 Hours, were given the job of taking the fight to their rivals to enable the OAK Racing Team Total to clinch its first titles in the series. 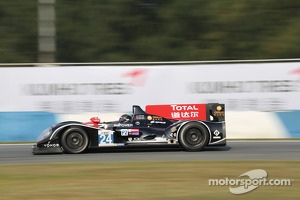 The tiny gaps in the first three practice sessions between the OAK Racing Team Total, KCMG and Craft Racing LM P2 prototypes was confirmed in qualifying. Thus, for the first and only time this season OAK Racing Team Total did not set pole and the car lined up in second place on the grid. On Sunday at 15h00 (Malaysian time), Cheng was given the job of doing the first stint. The Stewards reckoned that he jumped the start slightly and he was obliged to let his rivals past.

From third place David immediately snatched second and then crossed swords with the leader James Winslow, his main opponent for the title. The OAK Racing Team Total then opted for an aggressive strategy by managing its Michelin tyres in exemplary fashion. Ho-Pin Tung relayed Cheng and set exactly the right pace bagging the fastest lap of the race. Thus, he took first place, and a daring final stop during which the team decided to change only the left-hand tyres helped him to increase his lead over KCMG in the closing stages of the race.

Thus, the OAK Racing Team Total scored its second victory of the 2013 season in the Asian Le Mans Series, which gave the French team the teams’ title ahead of KCMG. And David Cheng won the drivers’ title also by a margin of two points as Ho Pin-Tung, who was very quick all season, was unable to take part in the second round of the championship. These titles in the Asian Le Mans Series are the cherry on the cake of a year that’s been an amazingly rich one for OAK Racing, which shared its success here with the Judd engineering company.

This success has a particularly sweet taste as it gives the Sarthe-based team an invitation for the 2014 Le Mans 24 Hours! David Cheng, no. 24 Morgan-Judd LM P2: “It’s been an incredible season. Winning the first Asian Le Mans Series title is a really great achievement. I’d like to thank the OAK Racing Team Total and in particular, Ho-Pin Tung. As he proved in this race he’s made a big contribution throughout the year thanks to his experience and his speed.” Ho-Pin Tung, no. 24 Morgan-Judd LM P2: “It was a thrilling race. All the pressure was on our shoulders.

KCMG was on pole so we had to win whatever the cost. David Cheng anticipated the start even so slightly and he gave his tyres a hammering as he tried to stay in contact with the front-runners. So we had to take risks to close the thirty-second gap to the leader. The car was absolutely perfect and consistent. We really believed in it, and thanks to the impeccable job done by the whole team we won, so we‘ve got every reason to be delighted!”

Jacques Nicolet, OAK Racing President: “I’m very satisfied with this exceptional result, and above all I’m very proud in the way it was obtained by OAK Racing Team Total and its drivers. Today, we had to win to clinch the teams’ title and the drivers’ crown for David Cheng. Obviously, we must associate Ho-Pin Ting with this title as he put on another exceptional performance. For the first Asian Le Mans Series we managed to convince local partners to join us, in particular, Total Lubricants China, and we decided to bet on Asian drivers.

For the future and the development of the series it’s very important that a Chinese driver, David Cheng, won the title. “A big bravo to the whole OAK Racing team, which has managed this project perfectly to bring it to success, and also to the organisers , Mark Thomas and the ACO, who were able to keep it on track, which wasn’t easy in its first year. We must also congratulate our technical partners, Judd and Michelin. They did a perfect job that allowed us to show exactly what we’re capable of!”

Patrice Devemy , General Manager, Total Lubricants China: “We jumped at the chance to become involved at the very start of an adventure with the determination to build something solid for Total in Asia, and in China in particular. It took OAK Racing and its drivers a little time to find their marks on this new territory, but as is always the case in the face of difficulty ‘cometh the hour cometh the man,’ and we went on to score some great wins. This victory and the titles are proof of this. I’d like to congratulate the drivers and each of the team members on their investment: we share their joy and this also gives us very special pleasure today. This first year has been a really fantastic human adventure.”

The provisional schedule for 2014 Asian LMS is confirmed