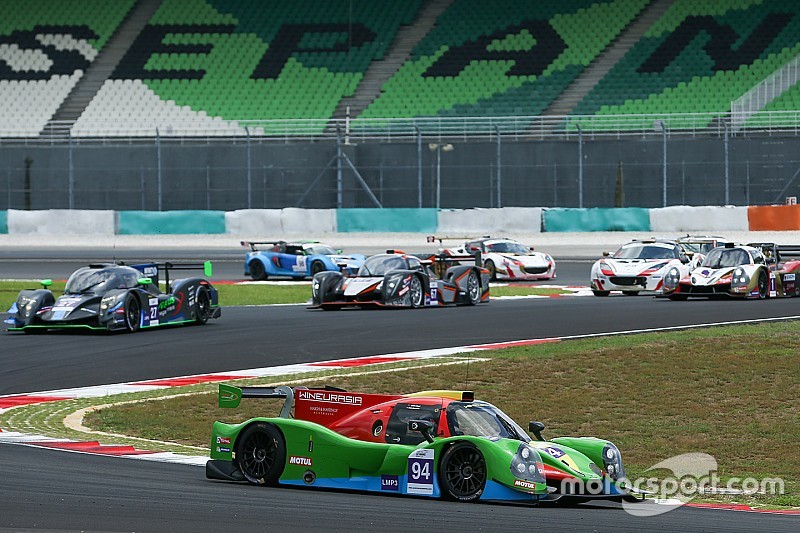 Matthew Solomon and Aidan Read leaded for nearly the whole race the #94 Ligier JSP3 at the Sepang International Circuit.

Wineurasia Motorsport have claimed the top step of the Asian Le Mans Sprint Cup podium for the 2nd time this weekend, with Matthew Solomon and Aidan Read leading for nearly the whole race in the #94 Ligier JSP3 at the Sepang International Circuit. The #1 DC Racing Ligier came 2nd, with James Winslow and Dean Koutsoumidis at the wheel, and the #27 Nexus Infinity ADESS 03 was third, driven by Adrian D’Silva and Garnet Patterson.

Jamie Winslow and Dean Koutsoumidis made the most of the opportunity and delivered a great performance, starting from last on the grid and making their way up into 2nd by the end of the 1st lap. Although they tried hard to reach them, the duo of Solomon and Aidan Read were too fast for them to catch up.

The #27 Nexus Infinity had a good consistent race, with Adrian D’Silva and Garnet Patterson going from their 5th place on the grid up into 3rd and holding that place for the majority of the race; they started to challenge the #1 DC Racing Ligier by the end, and crossed the line in third.
The PRT Racing Ginetta LMP3, due to a problem with the oil pressure and a few spins on track, struggled a bit in today’s race and finished 4th, but Charlie Robertson still succeeded in setting the fastest lap of the race with a time of 2:00.686.

Matthew Solomon: “Fantastic weekend for the team. They’ve done an amazing job since the start of the weekend. Everything’s been going forward since we got here. I took the start and pulled a decent gap, and just managed to conserve and save everything, bring it back for the pit stop and hand over to Aidan who did a fantastic job to bring it home. We were very comfortable on the car for our first weekend in LMP3, which is amazing. Great job by our team on all fronts. I’m really happy with the way it went, and hopefully we’ll be back to continue this performance.”

Aidan Read: “Like Matt said, we’ve been making good steps with the car since the start of the weekend. It’s my first time in LMP3s, so I’ve been feeling more and more comfortable. The setup’s been going in the right direction. Today was a well set car, and I think we’re happy with the performance. Matt did a good job in qualifying to put us on pole and just kept that momentum going and pulled in a nice big lead. It was very comfortable and we’re very happy with the car. We’re both happy with today’s race. When he handed it over to me, it was just about controlling things and bringing the race home, which is an awesome feeling to come home with two wins this weekend. Congrats to the team, it’s a great result for them, they’ve put in a lot of hard work.”

Dean Koutsoumidis: “It’s really nice to be back in a prototype car in Sepang. We had a few gearbox problems, which resulted in us missing quali and race 1, but through the hard work and the good will of a couple of teams, we got back for this race. We’re ecstatic to be sitting here. The car had good pace and we did the best we could. We’re very happy. I’d like to thank Eurasia and DC Racing for making this possible.”

James Winslow: “As it’s been said, we missed yesterday’s race and quali, and so had to start from the rear of the pack, made a reasonable start, got into second position on the first or second lap. Matt did a great start in the Wineurasia car and I couldn’t keep up with his pace. We had some minor issues but these two drivers drove fantastically, so congrats to them. And Garnet and Adrian drove a great race to give us a race to the chequered flag. A big thank you to DC Racing and Eurasia. It was good to be in an LMP3 car for the first time.”

Adrian D’Silva: “It’s the first time I’m in a prototype. I really enjoyed this weekend. I’ve got to thank Cyrille for putting this all together. I think we’ll have more cars here next round, which will be great fun. A lot of young drivers, myself being one of the veterans, struggling with the heat and keeping pace with all of them. Otherwise it’s been a great weekend. We’ve got some issues to deal with the car, which we’ll sort out by the next round. We hope to see you all up here again.”

Garnet Patterson: “I’d really like to thank Adrian, CQ, the whole team and/of Infinity Race Engineering for giving me a chance this weekend. It was really good. It’s my first race out of open wheel cars. It’s been a really good weekend. We had a really good race. Adrian had a good first stint, handed the car over quite well. I knew that James and Dean had a pretty good lead and tried to put my head down and put in consistent times to try and catch them. I could see I was getting closer, but time was running out. Credit to everyone else for the great race. It’s really good being here and hopefully we can develop the car; it’s got a few little issues, but it’s very promising first race. Really good speed. If we keep developing and catch the Ligiers, it could be a great year. I’d really like to thank everyone for the opportunity.”

Sebastien Mailleux: “Thanks first of all to PS Racing; we really had a great car again today. My mission for the first stint was really to come home safely for Neric, so to save the tyres, as we started on an old set of tyres. So I went pretty slow and steady for the run. We had a few issues with the radio, but it little else. The Asian Le Mans Sprint Cup is a very good series, I hope it will have a very strong future in the region.”

Neric Wei: “Firstly I need to thank the team and all the boys from PS Racing. They’re doing a fantastic job. The car has been pretty good. We’ve only used one set of tyres for two races. The aim was to bring the race home and be safe. I think next time at Sepang we’ll be pushing a bit harder and we’ll see where we get.”

Graeme Dowsett: “It was a bit of a fight, yesterday as well. Unfortunately we didn’t finish. Thank you very much to the Asian Le Mans Sprint Cup. I think it’s an excellent platform and I look forward to next race weekend. From our side, we all enjoyed it. We were catching our tail a bit with just getting the car mid-day Thursday and completing about 4 laps each prior to race 1. It’s good to get a result to race 2. Thank you very much to all the guys in the team, Will Bamber, our team engineer, and everyone else involved. Thanks also to the guys we’re racing with. It’s very clean racing and there’s no incidents which is what I think we’re all after at the end of the weekend. Thank you very much and looking forward to next weekend!”

John Curran: “I’d like to reiterate what Graeme said and also thanks to the sponsors and to the race organisers for working with us to get us out on track. Unfortunately yesterday didn’t go as planned, but we made up for it today. It’s been an awesome weekend and see you guys for rounds 3 and 4.”