The ACO would like to wish the 2013 Asian Le Mans Series the best of luck!

The Automobile Club de l’Ouest continues to develop endurance races on a global scale. The first race for the Asian series will be on the Zhuhai circuit in China.

In two months the Asian Le Mans Series will kick off on the Zhuhai circuit in China. This new continental endurance championship presented 5th March, in Hong Kong, will crown the efforts invested by the Automobile Club de l’Ouest to boost the global impact of this branch of motor racing.

Since the Automobile Club de l’Ouest created the Le Mans 24 Hours in 1923, the ACO has continued to develop endurance races on a global scale. After launching its first continental championship in 1999 with the American Le Mans Series followed by the European Le Mans Series in 2004, all that was lacking was the Asian equivalent of these two not-to-be-missed championships. This lack has now been filled thanks to the Asian Le Mans Series whose first event will take place on 5th May on the Zhuhai circuit in China.

Six 3-hour races are on the 2013 calendar of the first Asian Le Mans Series. They will be held all over the Asian continent with three rounds in China to launch the season followed by races in South Korea, Japan and the closing event in Indonesia.

The Asian Le Mans Series has reinforced the endurance pyramid put in place by the ACO. At the base are the three continental series – American LMS, Asian LMS and the European LMS – with the next level consisting of the FIA World Endurance Championship and at the summit of the pyramid is the Le Mans 24 Hours, the ultimate race in which all those competing in these championships dream of taking part as the different continental echelons are the surest way to achieve this aim. 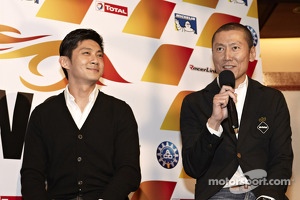 The Automobile Club de l’Ouest has entrusted the running of this new series to promoters who are firmly implanted locally. Mark Thomas’s S2M company, which was already the ACO’s partner in the 2010 and 2011 events counting for the Intercontinental Le Mans Cup on the Zhuhai circuit, has been in China since 1999 and will look after the commercial and marketing side. Top Speed Motors & Sport managed by Davide De Gobbi, based in Shanghai since 2005, is in charge of the logistics, organization and running of the races. The ACO will accompany and assist this new championship on its launch in 2013 with its technical squad and officials.

On this day of the official launch organized in the prestigious Hong Kong Yacht Club, the Automobile Club de l’Ouest would like to wish the Asian Le Mans Series the best of luck!

Pierre Fillon, President of the Automobile Club de l’Ouest: “On the day of the official launch of the Asian Le Mans Series I’m delighted to see that this Asian championship, which we’ve all been working on for a long time, has finally come to fruition. Like all the continental series run under the Le Mans label in the spirit that has driven the Le Mans 24 Hours for the last ninety years, the Asian Le Mans Series will enable manufacturers to showcase the reliability of their cars, promote their image and also demonstrate the validity of their new technologies on the crucial Asian market in a sporting and competitive spirit guaranteed by the values of the Automobile Club de l’Ouest. The ACO is particularly proud to have contributed to the development of motor sport on the Asian continent by enabling teams, drivers and their partners to take part in endurance events, whose values are those which, since 1923, have underpinned the success of the Le Mans 24 Hours.”