It looks like the newest incarnation of the Asian Le Mans Series is struggling to get off the ground, just like all of its predecessors.

With today’s news that the Asian Le Mans Series will be reducing its schedule and starting later in the year than planned, will an Asia-specific sportscar series ever actually get off the ground? Let alone be 1/10th as successful as the American Le Mans Series was?

Ask anyone in the Le Mans paddock – whether it’s a manufacturer, team boss, driver, or even fan – and the answer is nearly always the same: “there is opportunity in the Asian market, sportscars and GTs should race there.”

But to date, the struggle to actually get to the point of racing has been a massive challenge. 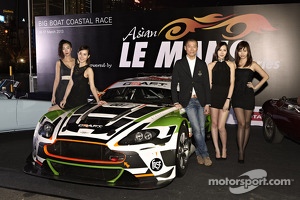 The idea of having a Le Mans branded series based in Asia is as old as the ALMS initiated by Don Panoz and backed by the Automobile Club de l’Ouest. It would have been called the Asian-Pacific Le Mans Series. And when the ACO introduced the European Le Mans Series in 2003, it was easy to make the small leap to the thought of an Asian Le Mans Series being launched soon. But lack of entries in the ELMS led to the series’ cancellation and needless to say, its would-be counterpart in Asia never got past the drawing board. Then in 2006, another attempt to get entries interested in the Japan Le Mans Challenge failed in its second season. Again in 2009, teams from Europe made the trek to Okayama for a 1000km event but nothing really came of it.

So, everyone says there should be racing in Asia, but nobody wants to make the investment to go there to actually race? At least that’s the way it would seem.

Perhaps it’s the massively popular Japanese series Super GT that has a strangle hold on the market, and unlike NASCAR, is too close to Le Mans type racing to attract crossover fans?

Or maybe the ACO needs to make a true investment in the region, instead of small, tentative tries, perhaps involving the big Japanese automakers in some way. As a matter of fact, the ASLMS announced a few weeks ago that in the Fuji round of the series, the GT300 class cars from Super GT would be eligible to run. This is a great idea, and serves two major purposes: it pads the grid with more cars, and it involves established racing from the area, helping the crossover effect. But more could always be done.

A major disadvantage is the lack of supporting infrastructure for Le Mans racing in the region. There simply aren’t enough teams and Le Mans-centric business activities going on in that part of the world to gather enough interest to support the costs of an entire series. This means the interest comes primarily from outside sources (Europe mainly) and consequently results in the need for major investments from these sources (hard to justify in this economic climate). In the end, it’s not a two-way street.

Time will tell as to whether this new iteration of the Asian Le Mans Series will get off the ground. Their marketing efforts have been commendable so far and the series infrastructure seems to be there. But if there aren’t any cars on the grid, the series will simply join the growing list of attempts to conquer the Asian market.