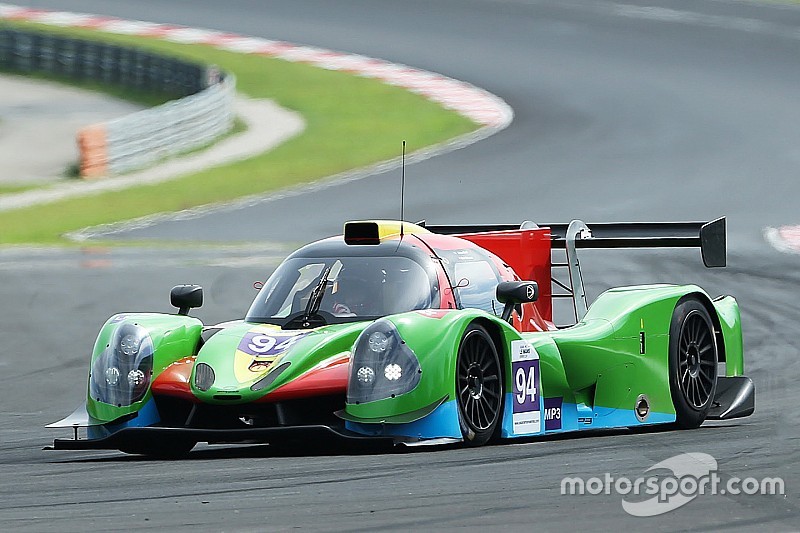 Team AAI ADESS 03 was 2nd, and the PRT Racing Ginetta LMP3 was 3rd on the first race of the Asian Le Mans Sprint Cup this weekend.

The conditions for the morning’s two qualifying sessions were tricky, with the track being quite damp, but not enough to be declared wet, but this did equalise out the field and showed how close the competition would be for the races that were to come. Ollie Millroy, now racing alone this weekend after Junsan Chen got stomach flu on Friday, took pole for the first race in the #91 Team AAI ADESS 03, with a best lap of 2:20.057. 2nd overall was Neric Wei in the #68 PS Racing Ligier JS 53, really showing off the power of the CN car. On pole for the GTCup class was Robert Webb in the #11 Team Lotus HK Lotus Evora GTC.

In the second session, Matthew Solomon continued his work from yesterday and took pole with a best time of 2:18.852 in the #94 Wineurasia Motorsport Ligier JSP3. 2nd on the grid would be Sebastien Mailleux in the CN entry, the #68 PS Racing Ligier JS 53, who managed to set a best lap of 2:21.743, before pushing a bit too hard and ending in the gravel, bringing out the red flag to end the session a couple of minutes early. The GTCup pole went to Dominic Ang in the #28 Team Lotus HK Lotus Evora GTC, who will be starting 4th overall on Sunday with a time of 2:28.881.

First race under a hot sun

The first race of the Asian Le Mans Sprint Cup took place under a hot early afternoon sun. Charlie Robertson in the #67 PRT Racing Ginetta LMP3 got a good start and made it quickly up into first, having started from 3rd, whereas pole sitter Ollie Millroy dropped to third, and the #94 with Aidan Read made his way into 2nd.

The first half of the race saw the leaders pair off, with the #67 PRT Racing Ginetta LMP3 and the #94 Wineurasia Motorsport Ligier JSP3 fighting for first, and a few seconds behind them, the other two LMP3s, the #91 Team AAI ADESS 03 and the #27 Nexus Infinity ADESS 03 were duelling it out for third place.

When it was time for the pit stops, the field shuffled around, with the #94 Wineurasia Motorsport Ligier JSP3 coming out on top. With Matthew Solomon at the wheel, they led until the end of the race, also setting the fastest lap of 2:00.934. The #91 made its time back up and crossed the line in 2nd place. The #67 missed the pit window by a mere 6 seconds, and had to take a stop and go penalty, which cost them valuable time in the race, but Ate de Jong still managed to take 3rd. The Nexus Infinity ADESS 03 came 4th.

With three brands represented on the LM P3 podium, this is proving to be a very interesting category to watch.

For the CN class, Neric Wei in the #68 PS Racing Ligier JS 53, though second on the grid, dropped back behind the LMP3 cars on the starting straight, the car not having the power to keep up with the acceleration of the LMP3s. He spent the race in a comfortable 5th overall, before handing it over to Sebastien Mailleux at the halfway mark, who brought it home, happy that the car made it to the end of the race.

In the GTCup class, the #77 Team NZ Porsche GT3 Cup could finally show its colours in the race, having missed out on a few sessions. Starting from the back of the grid, John Curran quickly made his way up the field and was leading the class by lap 2. After the pit stops, Graeme Dowsett took over, but was overtaken by Dominic Ang in the #28 Team Lotus HK Lotus Evora GTC. The #77 didn’t make it to the end of the race and stopped on track on the last lap. The #11 Team Lotus HK Lotus Evora GTC driven by pole sitter Robert Webb was 2nd, and the #98 Team Lotus HK Lotus Exige Cup R came third.

The #1 DC Racing Ligier JSP3, unfortunately could not take part in today’s sessions, after having a problem with the gear shift. They are confident they can take part in tomorrow’s race.

Aidan Read: “We started fourth after quite a tricky qualifying session this morning, with the rain overnight which soaked into the track and made things quite tricky out there. I had a good start and got up to second, then after a few laps and from there we just got a pretty stable gap to first. After the start it was about controlling the gap. The car’s been good all weekend. We’ve made some good progress in free practice. We’ve been very happy; it’s been a great day.”

Matthew Solomon: “A tribute to the boys, they did a fantastic job all weekend. We started off with the car being quite tricky to drive on Thursday and the team’s really worked on it and safe to say, the car’s pretty good. Aiden did a fantastic job in his stint, and once I got in, it was just about catching the leader, passing him and maintaining the pace and bringing it home. Well done to everyone this weekend and a big thanks to Eurasia Motorsport for putting it all together. Hopefully we can do it again tomorrow.”

Ollie Millroy: “It was tough; it’s been tough all weekend. Because we’re one of the first cars from ADESS, which means that development wise, we’re quite a long way behind these guys at the moment, the key for us this weekend was to try and finish a race, so to come away second in the first race was a real good result and probably the best we could have hoped for today, and we’ll try and do the same tomorrow, and stay out of trouble, and hang onto these guys for as long as possible.

Charlie Robertson: “It was a tough race, starting third behind Ollie and the CN car. Got a good start off the line and pick Ollie off on lap 2, and then just focus on getting my head down and getting the biggest lead possible before handing over to Ate. The car felt good; there are a few little changes we have to make tomorrow, but I think we had the pace there, it was definitely there during testing, we just need to unlock it now. Hopefully we can go one step higher tomorrow.”

Ate de Jong: “We were a bit late getting into the pitlane at the end of the first stint, so we ended up with a 6 second stop and go penalty, so that lost us the second place this race. For me, this is my maiden race, so I’m happy to be third, in my first race ever. So I’m very happy to have joined with Ginetta and the factory, and Charlie as a factory driver, and to be able to run in the Sprint series. I’m delighted.”

Neric Wei: “We did quite well in qualifying, but at the start, our car was just left behind because of the acceleration on the straight. After that, I thought I’ll just stick to my own and enjoy the race, before I handed over to Sebastien. It was a good race.”

Sebastien Mailleux: “I think the goal was really to finish. We had a couple of issues over the past days, the car handled very well. We’re just taking it slowly, and surprisingly we had quite a good pace, which was surprising and delightful to see at the end. I’m very happy to have finished the first race and get the points, and I hope that tomorrow we can do the same thing again.”

Anthony Chan: “This is the first time we’ve raced in the Asian Le Mans. It’s been a great experience.”

Dominic Ang: “I did the second stint, and we were second behind the Porsche at the start, who I managed to catch after a few laps, about halfway through the stint. Then I brought the car back home. I’d like to thank Team Lotus HK and Anthony for letting me drive with them and I’m glad to be with the Asian Le Mans Sprint Series, and to win the first round.