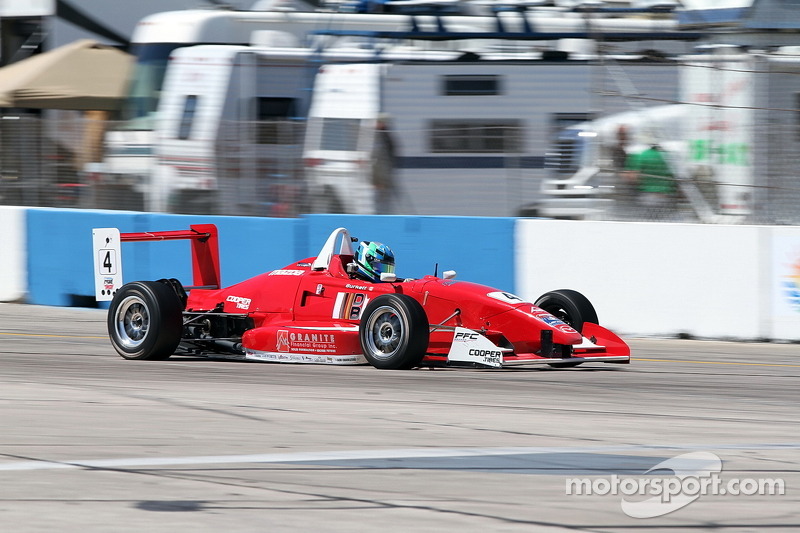 Track will host rounds three and four of 10-race season

The Atlantic Championship Series is headed to Watkins Glen this weekend for rounds three and four of its 10-race season. This is the first time that the Atlantic Championship Series will be running at the famed 11-turned, 3.4 mile, Watkins Glen track. The entry list for this coming weekend shows an increased car count from the inaugural series weekend at Road Atlanta. Twenty Atlantic cars, with a fairly even split of Toyota to Mazda powered engines, will take part in the weekend’s events.

The opening rounds of the Atlantic Championship Series at Road Atlanta were dominated by K-Hill Motorsports’ Daniel Burkett. The young Canadian driver also currently runs in a F2000 category (above), and had planned on a one-time entry in the Atlantic Championship Series this season. Burkett currently sits comfortably at the top of the points standings after his Atlantic debut. He has decided to continue his Atlantic run, and will see if he can accomplish similar race results at The Glen.

K-Hill Motorsports has a large contingency of cars that will be participating in races three and four, with multiple drivers high in the series’ points standings after the opening weekend. Conner Kearby, another young career oriented driver, ended his Atlantic Championship Series debut along-side teammate, Burkett, and is second in standings. The two K-Hill drivers are both highly spirited and competitive drivers that have proven to provide tough competition for some of the veteran Atlantic drivers.

Keith Grant, who was second to his brother in the 2012 Championship, will be starting the weekend at The Glen third in current points. The Polestar Motor Racing driver has a strong Atlantic track record and is an extremely consistent driver.

Another podium finisher at Road Atlanta, COMPREP Motorsports’ Ethan Ringel, will be among the Atlantic pack battling it out at Watkins Glen. The young driver will be seeking a repeat performance of his podium finish, and hopefully make it a double-podium weekend in his Swift 016 Mazda.

Many of the Atlantic Championship Series teams have added drivers since the first round in April, notably, K-Hill Motorsports and Swan Racing. The Glen will also be seeing the arrival of a couple new teams to the Atlantic paddock. Fahan Racing from Redding, CT will be running a Swift 016 Mazda, and Everclear out of Austintown, OH will be competing with a Swift 008 Toyota Atlantic car.

Watkins Glen always proves to be a track to showcase great racing, in tight turns, with close competition. The Atlantic Championship Series and its large 20 car field will make for an exciting weekend with practice starting on Friday, May 16th.

Qualifying for Race One of the Watkins Glen weekend starts at 8:55 am local time on Saturday May 17th, with the race following at 1:30pm. Sunday’s qualifying session starts at 9:20am, followed by Race Two at 3:15pm.

The 2014 Atlantic Championship Series is a 10-round, five-weekend SCCA Pro Racing sanctioned series for Atlantic cars of all types and ages, owned and operated by Formula Race Promotions. Along with the F2000 and F1600 Championship Series, the Atlantic Championship visits some of the best race tracks east of the Mississippi, and features engines from Toyota, Mazda and Honda, and chassis from Swift and Ralt. 2014 tracks include Road Atlanta, VIR, Watkins Glen, Mid-Ohio and the new road course at Thompson Speedway.