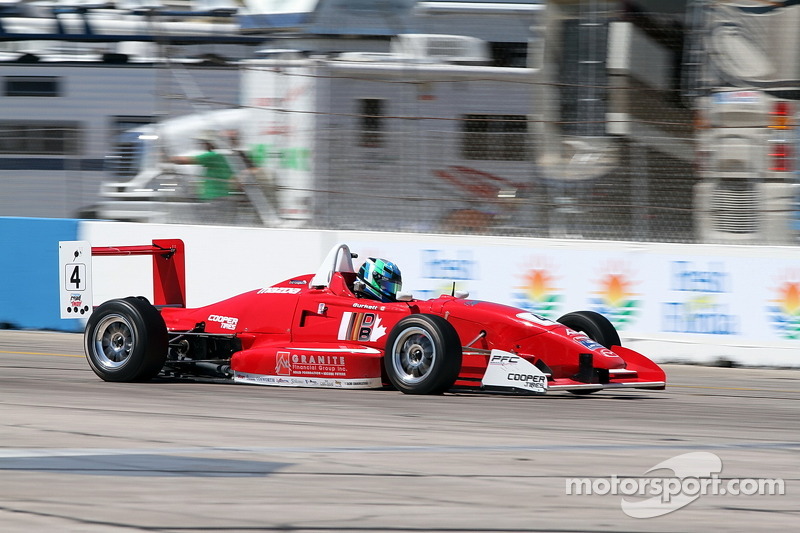 Daniel Burkett, K-Hill Motorsports driver and current points leader (in photo, in a previous F2000 outing), won round six of the Atlantic Championship Series at VIRginia International Raceway on Sunday. Coming in second was Jimmy Simpson of Atlantic Creations and Keith Grant driving for Polestar filled the third step on the podium.

Having been plagued with mechanical issues this weekend and unable to turn many laps on the VIR 17 turn course, Burkett said he was “basically running qualifying laps all race. He noted that Simpson was in his mirrors the whole race. “Now that Simpson and I clearly have our cars dialed in, Mid-Ohio will real exciting”, the young Canadian stated before taking his spot on the top of the podium. It was a nice bounce back from a DNF on Saturday, and made it five wins in six races.

After the green flag dropped, Saturday VIR winner Simpson was able to hold his lead position against a determined Burkett. Burkett attempted to pass on the inside of the entrance to turn one and on the exit of one. Simpson made some great defensive moves, but could only him off until turn three, when Burkett made an aggressive move and passed him for the lead. Burkett held the lead for the remainder of the race.

Simpson said he was “closing the gap on Burkett as the race went on” and that “the car was really good.” This was proven, as he didn’t let Burkett get away easily. He stayed extremely close to him and set multiple fast laps in the process. Simpson re-set his track record from Saturday, making the new VIR track record for the Atlantic Championship Series a 1:42.292.

Grant tried to catch the leaders, but sat comfortably in third for most of the race. He finished in that position and made a return to the podium on the third step. When asked about his race, the man of few words said, “I want to thank the Polestar team for providing a great car.”

Michael Mallinen driving for Swan Racing and Matt Miller of COMPREP both qualified in the top five and they finished out round six of the Atlantic Championship Series in fourth and fifth, respectively. It marked Mallinen's best finish of the season.

Ethan Ringel of COMPREP, qualified in sixth and made his way up to third during the race but had an incident that dropped him back to tenth and he retired into the paddock before the midway point of the race.