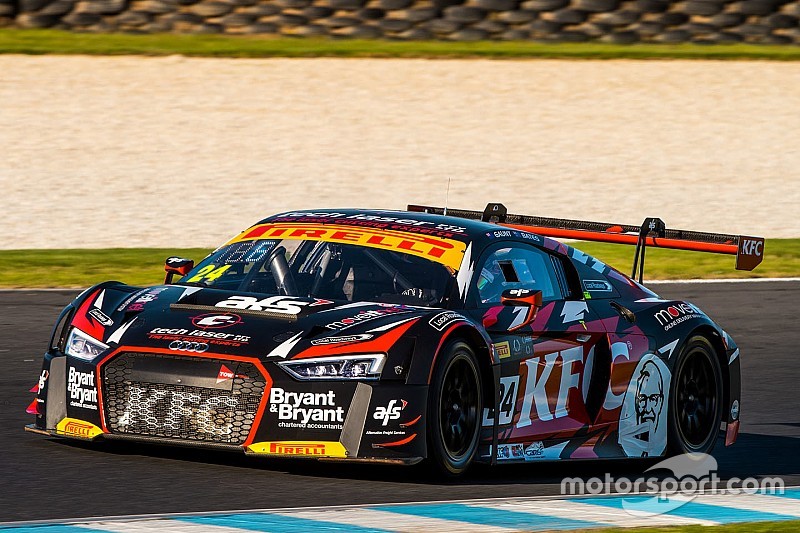 The #911 Walkinshaw Porsche was the dominant car for much of the afternoon, John Martin and Liam Talbot seemingly cruising to victory as the race ticked down to its final half an hour.

However Martin threw the win away shortly after taking over the car for the final stint, damaging the car enough to take it out of the race by running wide at Turn 1.

Martin's shunt left Gaunt and Bates as the surprise effective leaders, Gaunt controlling a 15-minute spring to the flag after a final Safety Car to lead home the SRM BMW by a little over four seconds.

"The car has been good all weekend," said Gaunt. "We were relatively lucky with how it all panned out, it was all a bit of a mess in the middle, but I kind of figured we'd be in the game. I don't know what happened to the Porsche at the end, but hey, we had pace all weekend.

"I'm stoked for Tony Bates and the team. Fourth at The Bend and a win here, we're in the championship hunt."

Martin was utterly dominant in the first stint of the race, the polesitter bolting into the lead at the start. The former LMP2 driver had 10 seconds up his sleeve after just 10 laps, that gap growing to 30 seconds by 15 laps, and 36 seconds when Martin made his first stop and handed the car over to Liam Talbot.

The second stint was much like the first for the leading Porsche, Talbot picking up where Martin left off before making an early second stop on Lap 44.

The race was then interrupted by not one, but two red flag stoppages.

The first was sparked by Rio Nugara having a huge crash coming over Lukey Heights, the impact destroying both his GT4-spec Ginetta and the tyre wall. The clean-up started under safety car conditions, before the race was suspended.

It was eventually restarted with just over an hour and a half before the time certain finish cut-off, only for Vince Tesoriero to immediately fire off at Turn 2 and hit the wall, followed by Jeremy Gray doing likewise seconds later, hitting the already-destroyed KTM.

That led to a second red flag as crews undertook another tyre wall repair, the next restart coming with just 40 minutes left on the time certain clock.

Through all the carnage, the #911 Porsche was still in control of the race. Ten minutes after the second restart Talbot made the car's final compulsory stop, handing over to Martin for the run to the flag. Moments later, their day was done.

"It's a bit weird really," said Martin. "We're looking to see if anything failed. It washed wide, then half on the kerb, half not on the kerb. It tore the splitter off and did a fair bit of damage.

"I didn't enter the corner any faster, the brake point was slightly earlier and a bit more pressure... from my side, there was nothing different to what we did earlier in the race today. It's still obviously my fault, I was in the car, I was driving. It's just trying to work out why, or what I could have done different."

Having taken over the #24 Audi from Bates during the single lap between the two red flags, Gaunt suddenly found himself in the effective lead after the Porsche retired.

A controlled drive following the final Safety Car restart was enough to secure victory for the Kiwi and co-driver Bates.

Steve Richards and Michael Almond came home second in the SRM BMW, their podium charge set up by a storming second stint from Almond where he went from the back of the Top 10 to fourth.

Four-time Bathurst 1000 winner Richards was then in the car for the final run, but couldn't quite overhaul Gaunt.

Third went to Australian Endurance Championship leaders Tony D'Alberto and Max Twigg, the Mercedes crew under a second behind the BMW after shadowing the leading two cars for the final 15 minutes of the race.