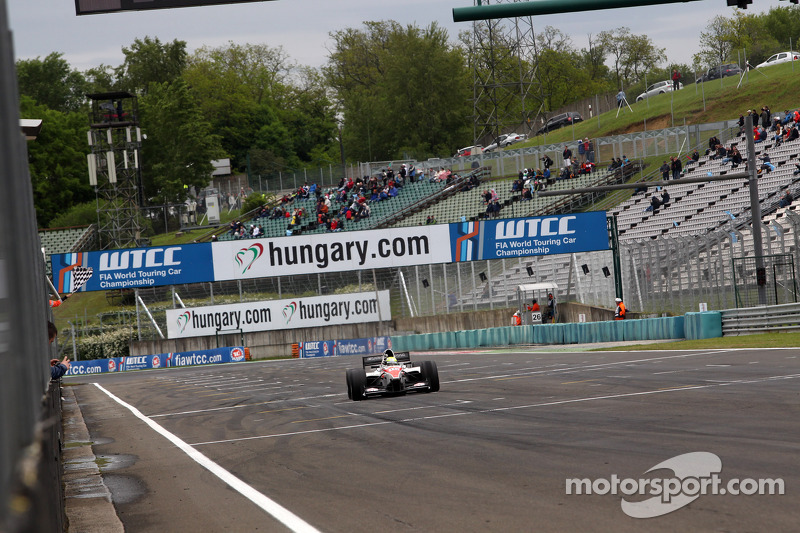 Sato dedicated his wins to the memory of Ayrton Senna 20 years after the sad Imola crash.

It’s been a perfect weekend at Budapest for Kimiya Sato (Euronova Racing). The Japanese racer won both races at the Hungaroring and increased his lead in the series’ standings. He’s the third driver in Auto GP history to sweep an entire weekend after Antonio Pizzonia and Adrian Quaife-Hobbs did the same in Brazil and Portugal in 2012.

Sato, who dedicated his wins to the memory of Ayrton Senna 20 years after the sad Imola crash, edged returning Vittorio Ghirelli (Super Nova). The reigning Auto GP champion started from the pole but, having lined-up on an intermediate set-up, he couldn’t match the pace of his rival and settled for second.

Sam Dejonghe scored his maiden podium finish for Virtuosi UK : after the third place of Andrea Roda in Race 1, the British squad continued in their positive run. Dejonghe took full advantage from the absence of Michele La Rosa (MLR71 by Euronova) on the grid to get a great start and continue from that.

Kevin Giovesi (Eurotech) took fourth place. He was one of the first drivers to enter the pits for the mandatory tire change and won a good battle with Roda. German Markus Pommer (Super Nova) rounded out the top-5 after a long battle with local favorite Tamas Pal Kiss (Zele Racing). The points zone was completed by Loris Spinelli (Eurotech) and female racer Michela Cerruti (Super Nova). The next round for the Auto GP championship will be in Italy at Monza, on the 1st of June.