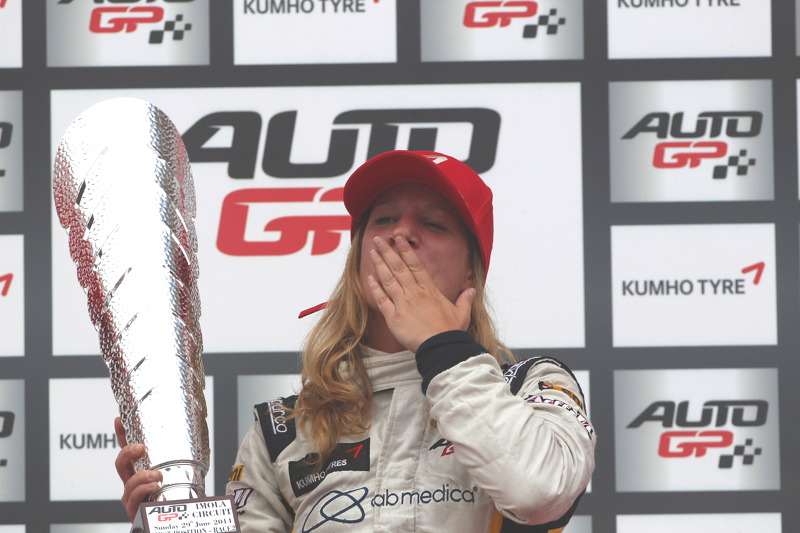 The 27-year-old from Milan scored the first open-wheel win for a female racer in the last 5 years.

The Auto GP championship celebrated an historic race 2 at Imola. Italian female racer Michela Cerruti cruised to her maiden win in the Coloni-promoted series in a spectacular fashion. The 27-year-old from Milan scored the first open-wheel win for a female racer in the last 5 years, and the first with an high-power open-wheel car in the European modern era.

Michela started well from fourth place, then chased team-mate Francesco Dracone (Super Nova) and Ibiza Racing’s Giuseppe Cipriani, who was leading the race. She took full advantage from a slow start by Christof Von Grunigen, who dropped several spots, and dived on Dracone to get second place with an outstanding pass. Then, at Tamburello, she took the lead when Cipriani spun and never looked back.

Kevin Giovesi scored a good second place for FMS, as he attacked Dracone on lap 4 before following Cerruti under the chequered flag. He also scored some really valuable points that allowed him to tie with Super Nova’s Markus Pommer for second in the championship standings, and also move on Tamas Pal Kiss (Zele Racing).

Returning Norwegian Pal Varhaug, driving for Virtuosi UK, scored the trophy for third place in a positive comeback to edge Kimiya Sato (Euronova) who extended his lead in points. While he’s aware that he will miss the round at Zeltweg due to the same-day commitment in the GP2 Series, in Germany, he kept his name atop the standings with a clean margin.

An exhaust issue slowed down Virtuosi UK driver Andrea Roda, who scored 9th between the two Zele cars, while the final points-paying position went to Dracone.

Michela Cerruti: “I’m absolutely on cloud nine. I don’t think there are words to describe how I feel now! I really want to thank the team because they did an outstanding job at the pit-stop, the car was perfect and everything went well on-track. Keeping Kevin Giovesi at bay for the whole race hasn’t been easy but I did it and now I won my first open-wheel race! Also, I’m able to celebrate on the same track where I won last season in Grand Touring competition, so I have another beautiful trophy... Celebrating today’s result with my team, my family and my friends is so exciting. I want to thank everybody who supported me along the way and I hope we will be celebrating for more wins soon!”