Gianmarco Raimondo is now a leading candidate for a last-minute entry for the Auto GP season starting at Marrakech.

Many new drivers showed up in the collective Auto GP test held this week at Valencia. They also had no trouble in fighting their way towards the front of the charts, fighting with more experienced rivals. 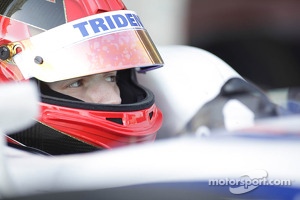 Sam Dejonghe set a new lap record for the series at Valencia, while Markuss Pommer, who decided to move back to open-wheel racing after a season in the Porsche series, impressed as well. Gianmarco Raimondo also proved strong

The Anglo-Italian racer, born in Saint Catharines, Ontario, on the 28th of November 1990, now resides in Tuscany. He went back on-track with Super Nova International after ending up the 2012 Formula 3 Open series in 2nd place and debuting in GP2 last year. Raimondo is now a leading candidate for a last-minute entry for the Auto GP season starting at Marrakech.

Gianmarco, how do you judge your debut? “The work done with the team has been positive. In Day 1 I only made a shake-down to verify that everything was ready. Unfortunately the weather forecast was predicting rain for Day 2's afternoon so we used all our new tires in the morning and completed several tests. I've been on-track for two straight hours, almost a Le Mans stint! After the skies cleared, we then proceeded to some set-up comparisons with encouraging results”.

What’s your impression about the Auto GP car? “It's definitely an incredible car! Really fun to drive, tougher than a GP2 Series car in terms of control and physical strength, but it also require you to be sensible like on a Formula 3 car: you cannot afford to make mistakes. The power is amazing, you feel the 550 horsepower pushing and it's fantastic. The Kumho tires also last longer than the GP2 ones but also enable you push harder than in Formula 3".

How many chances we have to see you at Marrakech? “After the test at Valencia, many. We are working really hard on it with my management and family, also thanks to the support of Super Nova. The Auto GP championship will be the best possible choice for my career in this moment, and I hope to leave as soon as possible towards Morocco".