CHAMPCAR/CART: The passing of Keith Duckworth

Keith Duckworth, one of the founders and driving forces of Cosworth Engineering, passed away December 19 at the age of 72. Duckworth and Mike Costin founded the company in 1958 in a little shop with just the basics like an engine stand in Shaftsbury Mews, London, England.

"We thought it must be possible to make an interesting living messing about with racing cars and engines," Duckworth is famously quoted as saying. 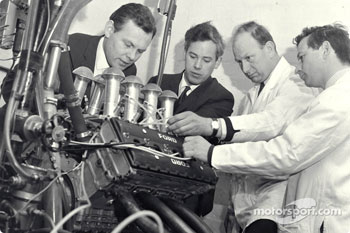 Cosworth Engineering: Bill Brown (Design and Development), Keith Duckworth (Engine Designer), Mike Costin (Team Cosworth), Ben Rood (Ford DFV F1 Engine).
Photo by Ford Motor Company and Wieck Media Services, Inc..
The two Englishmen wrote their own success story for over 20 years before Cosworth was sold for the first time in 1980 to United Engineering Industries. However, both continued to be involved in the firm even when it changed hands again later.

In 1990, after Duckworth's retirement, the Vickers Group took over the ownership and then, in 1998, sold Cosworth Engineering to the Audi Group, with a potentially dramatic effect on Ford's racing program, until the company was split in two: Cosworth Technology (including the engineering, manufacturing and casting units) stayed with the the Audi Group, while Ford Motor Company took control of Cosworth Racing.

Just one year ago, on November 15, 2004, two of the co-owners of the Bridgestone Presents the Champ Car World Series Powered by Ford purchased Cosworth Racing; the Ford-branded engine is the sole supplier to the Champ Car series.

Finally, this past summer, Mahle Group, one of the leading independent engine specialists, with over $4 billion in annual revenues, acquired Cosworth Technology from Audi, and renamed it to Mahle Powertrain. Cosworth/Mahle has recently worked on road car engines from the Ford Focus SVT, through Audi RS4, to Aston Martin's V12 engines.

Duckworth and Costin made the pages of motor sports history in openwheel, rally and closedwheel racing over the years. Their accomplishment in Formula One tops the charts.

Born in Blackburn, Lancashire, England, Duckworth received his early education at the Giggleswick School in Yorkshire, England. He later attended the Imperial College in London after a stint in the Royal Air Force.

Upon receiving his degree in engineering, Duckworth was hired by Lotus Cars in 1957 as their transmission development engineering. As fate would have it, Costin also was an engineer of Colin Champman's Lotus company.

The first assignment that the two new partners accepted after the founding of the new company was to develop parts for the Ford road car engines, concentrating on the Mk1 -- a modified 4-cylinder pushrod Ford 105E Anglia engine.

Within the first year, Duckworth, who was the main day-to-day operations manager/engineer, had relocated the firm's shop to Friern Barnet in the London area. Costin continued to be employed by Chapman until 1962. 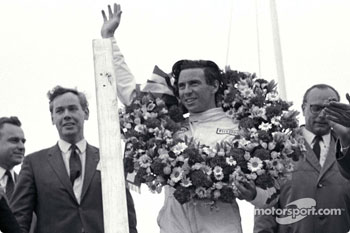 Podium: race winner Jim Clark with Keith Duckworth to his right.
Photo by Ford Motor Company and Wieck Media Services, Inc..
Their move to the current headquarters in Northampton was made in 1964. Duckworth retired in 1988 after serving the Chairman and Chief Engineer for the company for 30 years.

In 1966, Duckworth designed the DFV (double four-valve) F1 engine on behalf of Ford Motor Company, at the time, he simply stated, "We are too small as a company to allow development and debugging to win over sound design."

Walter Hayes, the public affairs director at Ford, in turn, offered the engine to Lotus, which had been stranded without competitive engine following the withdrawal of Coventry Climax after FIA changed to the three-litre formula for the 1966 season.

That three-litre V8 engine, which debuted in 1967, turned out to become the most successful Formula One engine of all time, winning their first race out of the box. Graham Hill claimed the pole at the Dutch Grand Prix in the Lotus 49, and Jim Clark followed with a victory in the engine's maiden race.

More than 150 GP wins came on the engine that Duckworth designed, as the Ford Lotus team dominated F1 with his original design -- and a few modifications for increased power output and FIA rule changes. This feat has yet to be equaled in the racing world.

"In engineering there is an answer to everything," Duckworth said once. "It's just that we're usually too ignorant or too dim to see it."

Duckworth, along with Costin and their team of engineers, proved that Cosworth was the absolute leader in the industry; until, that is, the rise of the turbocharged engines and the end to the decade-long domination by Cosworth, Ford and Lotus.

"Turbochargers were for people who can't build engines," was a quote attributed to a frustrated Duckworth in the early 1980s.

Cosworth later built the DFZ and HBA 3.5L normally aspirated F1 engines for Ford,and supplied electronics to a wide variety of F1 engines. The company continues its involvement today, and will supply CA2006 V8 engines to Williams F1 in 2006. 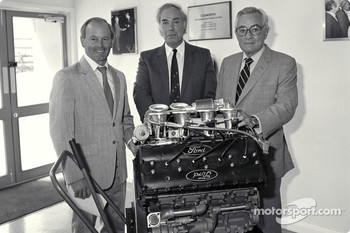 400th Ford Cosworth DFV F1 Engine: Mike Costin, Keith Duckworth, Walter Hayes.
Photo by Ford Motor Company and Wieck Media Services, Inc..
Ford was always a factor in the Cosworth firm, all of their racing activities remaining with the company. The two companies worked hand-in-hand over the years with Cosworth being a major player in Ford's decision to enter the World Rally Championship.

The talent of the Cosworth team crossed the pond in the late 70s and 80s to field the DFX, a stroked version of the F1 powerplant, in the then-USAC Champ Car series (then CART, and now again Champ Car) where they earned ten Indianapolis 500 victories and notched ten championship titles for top openwheel drivers.

In the late 1980s, Cosworth also created the highly successful Ford Sierra Cosworth RS500, which won the 1987 World Touring Car Championship, and the Ford Mondeo Cosworth, which took the 1993 and 1994 titles.

In 2004, when Gerald Forsythe and Kevin Kalkhoven became the new owners of Cosworth, Kalkhoven said, "Cosworth has a truly wonderful heritage of engineering that we have great respect for. We want not only to continue on from that great tradition but also move into the future with new projects and new ideas.

"There are many new markets we want to develop. For example, the company has been doing a lot of work on new technology marine engines, which should be very appropriate in the coming years. I believe there's a big opportunity in that area."

Hopefully his statement will ring true, as the name Cosworth evokes fond racing memories, but is also a true success story on two young men who had a dream and reached for the stars.