Spyker Cars, the Dutch company which owns the Spyker Formula One team, is considering selling part or all of the team due to a refinancing plan and is also making changes to the senior management. In a statement on August 14th Spyker said that ...

Spyker Cars, the Dutch company which owns the Spyker Formula One team, is considering selling part or all of the team due to a refinancing plan and is also making changes to the senior management. In a statement on August 14th Spyker said that negative publicity from the Dutch media earlier this year about the company's financial status had a detrimental affect in regard to investors and sponsors. 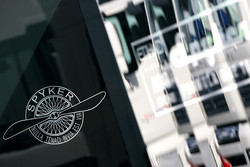 Spyker subsequently appointed an interim financial director and a consultancy firm to strengthen management and advise on future development. The company stated that continued media speculation "has induced a number of third parties to make unsolicited offers, including several for the (partial) acquisition of the Formula One Team. Management will begin active consideration of these offers forthwith."

Michiel Mol, director of Spyker Formula One Racing, is also considering a formal offer. To avoid a conflict of interests Mol and Spyker management have agreed that during discussions he will temporarily step down as director and also will "permanently relinquish" his position as CEO of Spyker Cars.

The director's role will remain vacant while talks about the possible sale of the team are ongoing, and in the interim the CEO position will be taken by Hans Hugenholtz, Vice Chairman of the Supervisory Board.

"Of the various refinancing scenarios being considered, the (partial) sale of the Spyker Formula One Team is but one possibility," the statement said. "Due to the ongoing nature of the review process it is too early for Spyker Cars N.V, to anticipate or speculate on the possible outcome."

It went on to say that Spyker Cars will be loss-making this year and the F1 team will not be "cash neutral" due to a higher than expected team expenditure as well as currency fluctuations and "less than anticipated revenues from the main income streams, such as television rights and sponsor income…" The statement concluded that the "short term liquidity position of the company is tight."

Spyker took over the Midland F1 team in September 2006 and entered this year's championship under its own name, with drivers Adrian Sutil and Christijan Albers. In July Albers was dropped after one of his personal sponsors apparently did not keep up payments. Team test driver Markus Winkelhock stood in for the European GP then Sakon Yamamoto was hired for the rest of the season.

No repeat winner in any Lincoln Speedway division

New Porsche hypercar rumoured to be under development

Analysis: Why Force India is the best value-for-money team in F1

Sakon Yamamoto to be reserve driver of HRT

No repeat winner in any Lincoln Speedway division

New Porsche hypercar rumoured to be under development